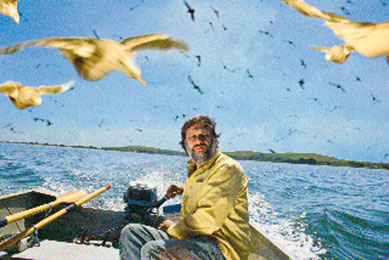 Cinema, the projection of our dreams, desires and nightmares, has always been a fertile subject for psychoanalysis.
In his freewheeling and endlessly amusing signature style, world famous philosopher, culture theoretician and mad cinema buff Slavoj Zizek takes psychoanalysis on a ride through some of cinema's seminal scenes and hurtles us, vicariously, on a journey into the recesses of the human unconscious.
Slavoj Zizek has attracted international attention with his work in the border zone between philosophy and psychoanalysis and has been called an “academic rock star” and the “wild man of theory”. He claims that he can only properly grasp a complex psychoanalytical concept by translating it into the “inherent imbecility of popular culture”.
Playfully utilising clips ranging from Blue Velvet to The Matrix, and Charlie Chaplin to Hitchcock's favourite blondes, Zizek informs and enlightens but also raises some key questions: to what degree are filmmakers aware of the unconscious or subconscious components of their own creativity? And how much do these components contribute to the success of their films?