What Do You Want to Hear? On the Quasi-Musical Filmography of Jia Zhangke

Halfway through Jia Zhangke’s feature debut, Xiao Wu (1997), the titular character asks if his newfound lover could sing a song for him. Xiao Wu, a lowly pickpocket, and Mei-Mei, a listless sex worker, attempt to reconcile their previously bungled meet-up at the local brothel. They sit on her bed, side-by-side, staring down the camera with despondent glances. She chooses Faye Wong’s ‘Sky’, whose Cantopop poetry rings resonant in a hollow room.

why is it full of tears?

why is its face so ashen?

Floating on the other side of the world

loneliness sets in again and again.

Sung acapella in a single take, through clogged nasal cavities and with a sickening swoon, Mei-Mei plunges her head into hugged knees, as if exhaustedly coming back to earth from an outstretched reach towards an unknown place, a not-quite tangible elsewhere. A despondent Xiao Wu flicks his puttered cigarette onto the floor. Mei Mei lifts her heavy head;

Xiao Wu pulls out his novelty lighter, a necessity for the chain-smoker. It acts doubly as musical relief, however, as he holds it close to Mei-Mei’s ear, releasing its flame to reveal the tinny sounds of Beethoven’s Für Elise, distorted via lighter as a crude approximation of classical grandeur. Mei-Mei slumps into the folded legs of Xiao Wu.

This exchange between two characters, shot in a single take, encapsulates a preoccupation within Jia’s body of work. Western culture seeps into mainland China as a slow trickle, anthems are approximated, filtered through faulty boomboxes and tinny trinkets. To describe these song selections as a “soundtrack” seems inaccurate. “Soundtrack” implies something of a consciously thought out setlist. I get the sense that Jia selects intuitively, his cameo in Unknown Pleasures (2002) as a warbling, homeless opera singer emblematic of his methodology. No one cares what he’s singing, casting a side eye towards his sentimentalist, incongruous claptrap. He sings in a broken amalgamation of French/Italian comprised of elongated vowels, a fumbling towards an unknown, invisible place.

Absence itself dictates these scrapped together setlists, a silence that necessitates a makeshift song-and-dance. Jia’s middle film in his hometown trilogy, Platform (2000), charts such a search. A roaming young group of “Art-workers” slowly transforms into a westernised hair metal showcase, as dictated by the encroaching allure of American product. 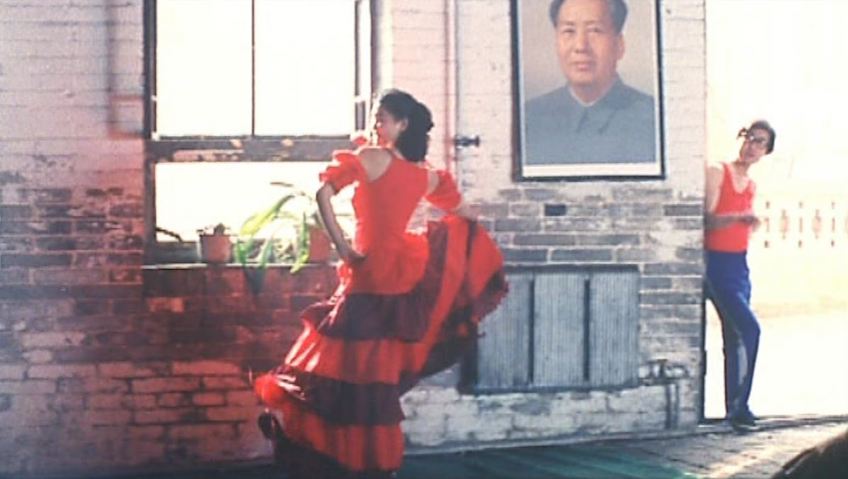 This transition is marked by the character of Ruijuan (Zhao Tao), trading a life on the road as an “art worker” for work as a tax officer back in her (and Jia’s) hometown of Fenyang. Refusing to cut, the frame encapsulates her movements as she slowly moves to the changing tune of a nearby radio. Su Rui’s “Whether” provides a lilting ebb to Ruijuan’s bored wanderings, made theatrical under the spotlight-like glow of an industrial lamp looming overhead. This glow penetrates, a sparked privacy, ringing, for no one in particular. Tao’s classical ballet training works as a form of exorcism, a disjunction between classicism and pop balladry that takes glee in a minor transgression. The glee is sullen and short-lived, however. Ruijuan dances in a tax office, after all.

Her pirouettes are mirrored later in the film, when her former troupe traverses a deserted landscape, their truck drained of gas. Minliang (Wang Hongwei), the troupe’s leader, wanders through the desolate valley, coming across a puddle. He takes his lighter to it, creating a gaseous fire that rises and rises. Xiao Wu’s novelty lighter has deepened in its value, a shoddy trinket now a scorched earth distress signal. Blue mountains hang imposingly in the background, casting their shadows on him as the night sets in. Again, a light transgression is dwarfed and made visible by a rousing fire. The puddle takes on an otherworldly aura, a startling and surprising spark that opens up and illuminates a moment of privacy. Yoshihiro Hanno’s spare score sets in - perhaps the only time in the film - plangent strings the only ricochet from a silent void. The music begins as soon as the fire is lighted, the strings that transcend through the films aural diegesis and into a tangible presence. “Loneliness sets in again and again”.

These scrapped together soundtracks emblemise a conflict within Jia’s work, an easier way to comprehend a seemingly infinite transitioning period. One could define it as a transition, represented in Platform, from proletariat wanderings through to commercialist exhibitionism, a one party nation whose current system maintains Socialist interests in-name-only. To further such a discord, Jia’s latest film, Ash is Purest White (2018), features prominently a soundtrack of imported pop anthems, one of them being “YMCA” by The Village People.  Jia emphasises a discord in ideals and intuition through a petulant throwaway line tossed off by Qiao, the cropped wig reinterpretation of Zhao Tao’s character from Unknown Pleasures, a local gangster’s loyal girlfriend whose devotion wanes over the course of the film. When asked about her views on ballroom music, Qiao responds that it’s “too Western”. The scene comes shortly after her drunk father is seen at a local coal mine. He spurns – via loudspeaker -the disinterested workers, espousing the values of solidarity and proselytising the thralls of an encroaching, unknown capitalist system. Qiao, beleaguered, yanks out his microphone’s cord, walks him home and lends some cash to waste away on mahjong. Qiao’s interests can’t be cleanly severed. Her communistic ties and snide, nebulously “anti-West” sentiments are drowned out by the blaringly distorted sounds of The Village People, an echo of her opening dance number in Mountains May Depart (2015), perhaps the only aggressively ironic soundtrack number in that film along with the Pet Shop Boys’ cover of “Go West”, also a Village People original. Her stiffened, state-mandated values yield underneath the strength of an intuitive rhythm—again, a fumbled grasp towards an interchangeable elsewhere, whether it’s the nebulous “West” or a warbled approximation of a vaguely “European” operetta. All signal towards a desired elsewhere, made tangible with an unknown foreign landscape.

Over the course of Ash is Purest White’s runtime, Jia most prominently remakes/revisits two of his films; Unknown Pleasures (2001) in the first third and Still Life (2006) in the second, set in the slowly flooding Three Gorges. Strands are left hanging, picked up and elaborated on slightly, as if there’s unfinished business with these lost characters. Their spirits maintain a restlessness, biding time between films. They wait for something, an absent, transitioning something. Recalling the static frames of Platform and Xiao Wu, Jia’s camera pans slowly towards a CCTV monitor, zooming into surveillance footage that frames a static Qiao, blankly frozen in the middle of a hallway. Unlike in the other films, this static frame remains quiet. Music, previously utilised to placate an incessant absence, ceases to exist. The present lingers, dulling and unknowable through blurred surveillance footage. The subsequent cut to black emphasises a prolonged uncertainty otherwise unseen in Jia’s work. For both the viewer and characters, commodified and scrounged for soundtracks act as a burning contradiction, a gloriously anachronistic conflict that provides a private solace, a darkened moment illuminated and made possible. For the first time, an uncertainty is left hanging. Silence itself becomes the newest sonic indication of an enclosing trap. Jia’s camera is no longer an intermediary for the moments of musical transcendence that have defined his work.

The lingering question, “What do you want to hear?”, is a residual mainstay in Jia’s work, Mei-Mei’s inquiry that kicked off an oeuvre of musical mobility. Each film retorts with an uncontrollable surge of unbridled flailing, the comfort of a private transgression. Stared at with the watchful gaze of a security camera, Qiao’s actions are made permanent and concrete. The discord between public/private, fluid/concrete, here/elsewhere are now dissolved, in the final scene’s attempt to grapple with our present moment. For Jia, music fills a void, extends a fire into an infinite landscape of possibility, perpetually unfulfilled. Only now has Jia matured to answer Mei-Mei’s question with an ambivalent, deafening silence.

Ash is Purest White is playing 19 August at 6.45pm at Hoyts.