The Killer Teen Queens of Thoroughbreds

A murderous The Bling Ring; a modern-day take on the “vengeful bitches” of The Beguiled. Thoroughbreds is a luscious vision of two teenage girls, a big expensive house, and an intent for murder.

Written and directed by first-time filmmaker and playwright Cory Finley, Thoroughbreds stars Olivia Cooke (Me, Earl and the Dying Girl) as Amanda, the girl who has no emotions, and Anya Taylor-Joy (The Witch) as Lily, the girl who lies to hide the fact that she has too many. What starts as two childhood friends meeting to study for the SATs together turns into a murder plot: the intended victim is Lily’s hated step-father, Mark (Paul Sparks); the hitman is an ambitious drug dealer Lily meets at a party, played by a scene-stealing Anton Yelchin. Like a pair of heartless Blair Waldorfs, Lily and Amanda blackmail him with an incriminating voice recording, and the plan is set.

Olivia Cooke’s deadpan delivery of Amanda’s borderline psychotic statements – the logical way she can justify murder, her mastery of “the technique” to mimic emotions – sets up the role of the villain. Anya Taylor-Joy’s Lily presents herself as prim and proper, but she’s freed by Amanda’s frankness. She is so bottled up it is inevitable that she should burst. Amanda, whether she intends to or not, sets things in motion. When Amanda examines Lily’s disdain for Mark, she nonchalantly asks Lily if she’s ever thought about killing him. At first, Lily treats Amanda’s suggestion as crazy. You cannot just go around killing people, she says. The next moment, she is asking Amanda how they should do it.

The film’s quiet, unnerving vibe and constantly disconcerting mood is reminiscent of Yorgos Lanthimos’ The Killing of a Sacred Deer. Not only are their posters comparable, but their muted colour palettes, and the calm and measured tone of voice used while deliberating sinister actions, conveys the same cold distance. 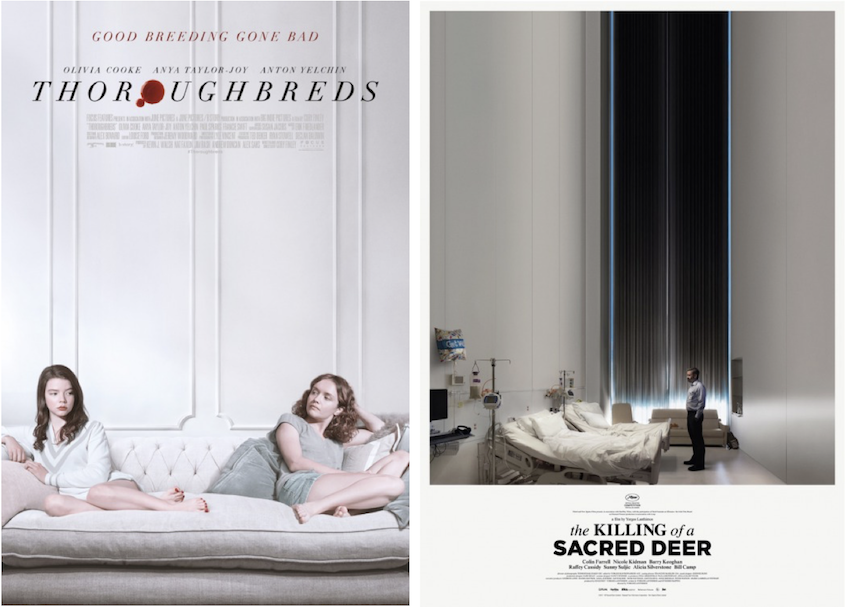 Posters for Thoroughbreds and The Killing of a Sacred Deer

Erik Friedlander’s score in the opening scene of Thoroughbreds features a deep drum, which can only be described as sacrificial. As Amanda arrives to Lily’s house in a black SUV, this haunting score, already suggests that whatever goes down in the house, not everyone will come out unscathed. The score throughout the film is primal. It is wild yet controlled. At one point the music stops abruptly with a scratch, like a needle being ripped off a vinyl record. This phrase repeats over and over within the scene. It is unpleasant, it is uncomfortable. This score would make sense in the jungle, not a large stately home in upper-class Connecticut.

The chaotic strings composed create a similar sense of horror to that provided by Mica Levi in Pablo Larraín’s film Jackie, a biopic about Jackie Kennedy in the aftermath of her husband’s assassination. Jackie and Thoroughbreds might seem an unlikely pairing, but they both depict their protagonists with a level of seriousness previously not afforded to them. Larraín and Levi surprised audiences with the brevity and isolation of the story. A similar effect is done by Finley. As Jackie walks around alone in a large house, so does Lily. All the while the scores provide a sense of unease, and the lingering threat for both films is what is unseen.

Thoroughbreds most violent scenes happen “off-stage”. The camera focuses on the person who will bear the consequences of the violence, rather than showing the violence itself. While Tim (Yelchin) carries out the plan to murder Mark, the focus is on Lily, who is away at a spa. Instead of knowing if he is successful, we are left in the dark along with Lily.

Another unlikely comparison is the deaths of JFK in Jackie and Mark’s in Thoroughbreds. Both murders are heard but are unseen by the audience. While the duelling and sacrificial score of these films contributes to a sense of unease, when the murder happens in Thoroughbreds, there is no score at all. All that indicates to the violent act is diegetic sound. The thumping of Mark’s body falling off of his rowing machine the floor above, the sound of the TV playing an old movie. The act can be heard, but you do not see it. Similarly, you hear the gunshot that kills JFK. But there is no illusion there. For Thoroughbreds, the audience’s imagination is allowed to run wild.

There is no shortage of murderous women or teens on screen. However, what is so unique about Thoroughbreds is the motivation. Martin, the psychopathic teenager from The Killing of a Sacred Deer inflicts grievous violence on a family as an emotional reaction to the loss of his father. Amanda comes across as psychopathic and acts as the main instigator of the murder plot, but she has no emotions, nevertheless any emotional tie to Mark. This is Lily’s game. Yet the true motivation for Lily’s hatred for her step-father is unclear. Usually, murderous women appear as a reaction to jealousy, or to past trauma. But this is not a rape revenge film. Likewise, there is no jealous lover, no known abuse. Perhaps, as a step-father, Lily sees him as an imposter. Maybe there is more to his concentrated stares than we know of. Whatever it is, he is a figure that needs to be eliminated.

Finley might find two girls alone together terrifying, but there is also a sense of awe. Where Heathers was made as a parody of high school life, literally made to be laughed at, Thoroughbreds surprises in its sophistication. This is due to the cleverness of the score and camera work, but also in correcting the mistake of anyone who underestimates just what a girl will do to get what she wants.

Thoroughbreds is playing 14 August at the Comedy Theatre