The Art of the Documentary: An Interview with Pietra Brettkelly

Pietra Brettkelly’s sixth documentary feature Yellow is Forbidden follows Chinese fashion designer Guo Pei as she navigates the world of haute couture. Exploring the tensions between culture and modernity, and art and commerce, the film depicts Guo Pei’s search for artistic perfection in the lead up to the 2017 La Conciergerie Spring Show in Paris.

2018 Critics Campus participant Valerie Ng spoke to Brettkelly about her own artistic process, and the responsibility of being a documentary filmmaker.

I read in an interview that you like finding stories that deal with isolation and what comes out of isolation. This is interesting because when I watched the film, I didn’t feel such a powerful sense of isolation, since Guo Pei was working quite closely with her husband and her collaborators. Could you clarify what isolation in the film really means for you?

I’m attracted to stories of isolation, and I don’t see isolation as a negative reflection on me and my life, where I grew up, and being a New Zealander in an international community and all these things that have affected me. If you look at my body of work, all of the characters, they reflect isolation. She is, by the very nature of her, isolated. Just saying her husband was there, that doesn’t make a person any less isolated. A person walking out on a street could be isolated… having a husband doesn't mean she’s not less isolated. She grew up during the Cultural Revolution. She grew up, as she says in the film, where there was nothing; there was no fashion. When she wanted to study it she had to go to Light Industrial School No. 2. There was no sort of concept of design. So it’s there. It’s intrinsic to how she expresses herself and [her work] has this purity and this naivety sometimes that doesn’t reflect an international aesthetic. So I think there is a purity to her creativity that is really interesting.

So you feel like it's a cultural isolation essentially within the industry?

Does the fact that you are following Guo Pei’s artistic process through your own cinematic medium affect your perception of how you’re making the film?

Absolutely. It’s that whole thing of, “this is a film, it’s a filmic approach.” Otherwise, you know, we’re making television, we’re just reporting. But to make a film, I enter it with a director’s sensibility; I’m directing the film. And so, if I’m not going to give somebody something special… they’re paying money to come to us, right? Otherwise, they might as well just watch the news. And that’s not what I want to do. I believe as filmmakers, we have the responsibility to give power to the visual, as well as what you hear, what you see, you know, all these different elements that we have.

Guo Pei’s work was exhibited earlier this year at the NGV Triennial here in Melbourne, so this city is already quite familiar with her work. What do you think are the different responsibilities of a filmmaker relative to an art curator in presenting her work to the public?

It’s like tennis and squash. You have similar elements, you have a racquet and a ball, but it’s a different job, it’s a different artform, it’s a different space. I’ve never curated art but I imagine that they have their processes and I have mine. But maybe they have a more intrinsic responsibility to her than I do. She hasn’t paid me, and my name is at the front of the film. It’s very clearly my perception of the two years I spent with her. I think if you go to a gallery, you don’t know who the curator is generally. Their name isn’t there when you walk in the door. And I don’t think you can often get an idea of what their opinion is. I think it’s interesting that they didn’t select her whole collection. I find that interesting. It wasn’t the whole 20 or 21, and I think that shows the editorial approach. But other than that, you can’t say that that exhibition had an opinion. You know what I mean? 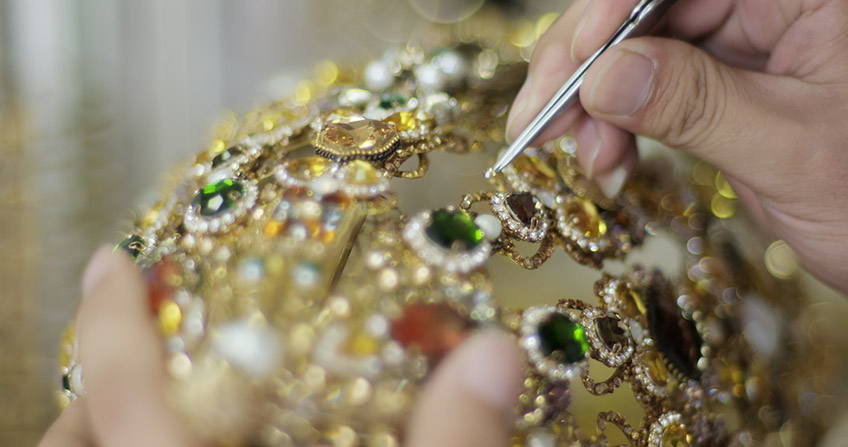 Yeah. I suppose there is some form of expression through the selection of dresses but there isn’t that much liberty of that expression.

I think by the very nature of them saying, “we are going to choose Guo Pei to be part of that extraordinary, beautiful, big exhibition,” that’s a commentary. But, they obviously just decided to choose the 18 pieces that they thought were the best, whereas I would have put in the other two and said, “Why were they off on that room?” And that’s possibly the difference between myself and and a curator.

Do you think your responsibility as a filmmaker is to expose the entire truth, as opposed to a curator?

As I see it. I’m very, very clear that this is my perception. It isn’t their truth, it’s the truth that I want to show; it’s a truth. My responsibility first and foremost is to myself. And if I don’t have that, then I’m a gun for hire. Then I’m doing it for some other person’s purpose. And I have very clear lines of operation. I make it very clear from the start that [the subjects] do not have any directorial control.

When I get to fine cut, so when it’s not sound mixed or graded, or sometimes tightened in duration, but the essence of the film is there, I show my subjects the film and we can discuss if they have any issues. I say that because they cannot change anything but we can discuss why I’ve made those selections and decisions, and if there’s something culturally that I’ve done incorrectly then of course I’d change it, you know, that is a given.