Q&A with Have You Seen the Listers? director Eddie Martin

Eddie Martin, director of the MIFF Premiere Fund-supported documentary Have You Seen the Listers? speaks about the process of making the film and our changing attitudes to street art.

Have You Seen The Listers? closely follows the life of Anthony Lister, an iconoclast street artist of critical acclaim and considerable notoriety. When you were planning this project, what was the main goal you set out to achieve when bringing Anthony’s story to the screen?

I have always thought 'wouldn’t it have been amazing if someone had made a significant feature documentary about iconic painters like Keith Haring or Jean-Michel Basquiat while they were still alive?' Imagine how invaluable those documentations would have proven over time. My goal was to create a culturally relevant and entertaining Australian film, told firsthand through an emerging icon.

From the perspective of a documentarian, what was it like working with Anthony Lister and his family? How did you gain their trust and manage to capture such raw and honest footage?

I ensured I spent time getting to know Anthony and his story intimately before we started shooting. This is something I like to do for all of my films. However this was a unique experience for me as a documentary filmmaker because the Listers are artistic by nature and that meant they were incredibly open and giving to the creative process. They’re remarkable characters and I’m grateful for the trust they bestowed on me. I’m genuinely honoured to share their story. 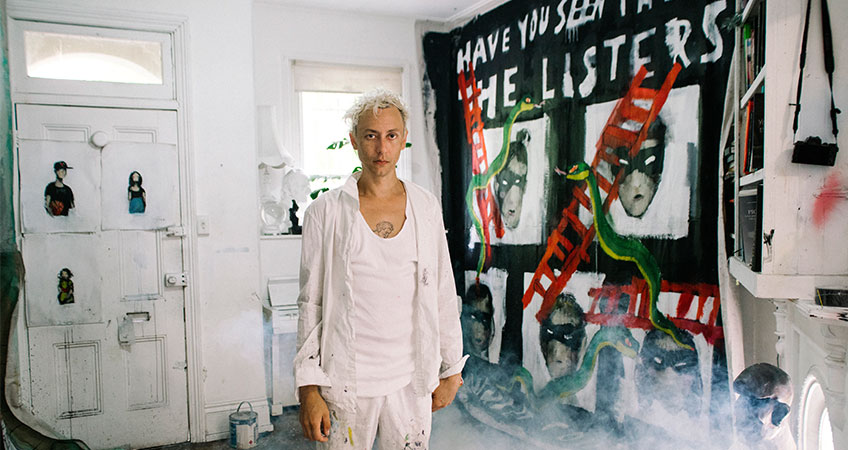 This is the second film you’ve directed about a troubled Australian graffiti artist. What draws you to study these subjects and what connection do you have to the street art scene?

"Every city has a roaming population of graffiti/street artists. Often ‘misunderstood’ by the lawmakers, these characters and their stories are significant and I find their sense of freedom inspirational."

It’s just a coincidence. Apart from being a fan, I have no connection to the street art scene whatsoever and I’m sure practitioners more qualified than myself would argue that Anthony isn’t really a graffiti artist. I’m interested in creating work that explores 21st century culture from a character foundation. With that said, every city has a roaming population of graffiti/street artists. Often ‘misunderstood’ by the lawmakers, these characters and their stories are significant and I find their sense of freedom inspirational.

The documentary touches on Lister’s lawsuit with Brisbane authorities and their reluctance to accept Lister’s work as art. Did you encounter any difficulties from the government while filming Lister painting in public? And what do you think can be done to shift the wider public’s distrust of graffiti as art?

Conservative governments have never welcomed any form of graffiti culture. But street art has now penetrated into the mainstream and is extremely popular with the public.

I personally didn’t encounter any difficulties with the Brisbane authorities. Unfortunately that is Anthony’s burden to bear and I was just present to document it as part of his story. It’s troubling to witness a government tear down one of its best cultural assets.

"Recently Brisbane Lord Mayor Graham Quirk announced "If Banksy had come to town, we would treat it in exactly the same way as Lister." ... Perhaps the irony will hit in years to come when Lister is given an exhibition at the Queensland Gallery of Modern Art."

Recently Brisbane Lord Mayor Graham Quirk announced "If Banksy had come to town, we would treat it in exactly the same way as Lister." Brisbane City Council wants to control public art and only allows state-sanctioned work to be seen. Their culture is being fashioned by a bureaucratic panel. Perhaps the irony will hit in years to come when Lister is given an exhibition at the Queensland Gallery of Modern Art.

Are you currently filming any other documentaries? What’s next?

At the moment I’m attached to direct a documentary about the real life individuals who inspired Larry Clark’s 1995 cult classic film Kids. They’re incredible characters and I’m excited by the stories potential.

Have You Seen The Listers? world premieres at MIFF on Thursday 10 August, at 6.30pm. There will be an additional screening Sunday 13 August and an access screening with Open Captions and Audio Description on Thursday 17 August.