Landscapes of Trauma: An Interview with Miranda Nation, writer and director of Undertow

Filmmaker Miranda Nation gives her audience intimate access to the insides of her character’s heads, whether we like it or not. In Nation’s debut feature film Undertow, a visceral drama set and filmed in Geelong, we’re forced to see through the eyes of Claire (Laura Gordon), a photojournalist still reeling from a late-term miscarriage. Lost at sea, she becomes fixated upon a pregnant teenager at the centre of an AFL scandal. I spoke with the director about footy culture, the horror of the female gaze, and Undertow’s thoroughly un-sexy sex scenes.

How’s MIFF going for you so far?

It’s been great, yeah. It was the world premiere of the film, so that was very exciting, and also terrifying. We’ve had a good response and had some good reviews, so, yeah! It’s been positive. And I’m doing a ‘Sex On Screen’ talk tonight with some other directors and actors.

Have you had any unexpected reactions to the film?

Had a kind of curly question the other night from an audience member who was a big Geelong Cats supporter, who wanted to know why I’d thrown them in the shit. And I was like, “It’s not actually…supposed to be that specific team? But I guess because it’s set in Geelong…” It’s more about, in my research, even though we’re talking about Aussie rules, that kind of behaviour is kind of endemic to a lot of sporting culture. Some people might see that footy culture and the setting as making it quite parochial, but hopefully that doesn’t stop [the film] from travelling.

What was it like filming out in the surf? Watching the film, the underwater scenes are such a sensory overload, so filming it must’ve been crazy.

We scheduled that day depending on what the tides were doing. Which was kind of funny, being a quite female-driven film, we were like scheduling around the tides and the moon and stuff. It was pretty horrible to shoot, but our key grip is a local from Torquay, and a surfer. We had two people in the water that knew the surf really well, and then our DP bravely got into her wetsuit and got into that water. And Laura (Gordon, who plays protagonist Claire) was a champion, to plunge into that Victorian surf, which is freezing even in the middle of summer. 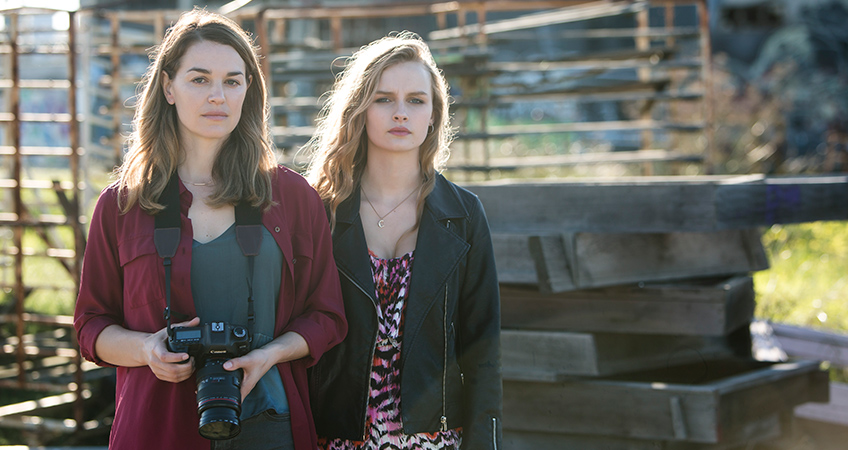 Was that collaborative atmosphere different to working on your short films, where you had to perform a lot of roles on set yourself?

I mean, it depends. Eli The Invincible [previously screened at MIFF 2011] I did myself, it was a self-funded short. I co-produced, I did all the costumes, and locations, production design. Then with Perception [MIFF 2013], that was a bigger budget, and a much more collaborative film. But the feature is just a much bigger scale production. We definitely sought to have locals involved, crew and cast.

Going back to Undertow, I think Laura Mulvey would’ve had a field day with your movie. It definitely plays with kind of negatively charging the female gaze, and almost making a horror movie out of what it’s like being in a woman’s body.

For me, the film is about the female body as a landscape. Definitely elements of body horror there. For [cinematographer Bonnie Elliot] and I, it was important that the film is very visceral. It’s about how the characters see their own bodies. For Claire, who’s been pregnant and had this loss, her body’s like a traitor to her, this barren wasteland. So her gaze on her own body is very critical, and she sees death and decay everywhere. Whereas for Angie, she’s got this precocious sexuality, using this body as a tool to get what she wants. But [their bodies] are both landscapes of trauma.

There’s a lot of nudity and sex scenes in the film, but they’re not very sexualised. What was it like working with the actors to produce that intimacy? Especially since each of the relationship dynamics in each scene are so different.

This is kind of a practice run for what I need to talk about tonight! I wanted the nudity and sex scenes to be in service of story, not just gratuitous titillation. The first sex scene, between Claire and Dan, shows that they are a loving couple, but they can’t kind of get it together. And with the Angie and Brett sex scene, I was trying to show that they did have fun, there was this childlike sexual energy between them. But also to make you see that this is a child that he’s sexually exploiting. The final sex scene on the beach is meant to be that the two characters are committing a nihilistic act, with no joy, or sexual pleasure.

Yeah, throwing themselves off a cliff, pretty much. We had a lot of talk about it with the actors. None of them except Laura had ever done sex scenes, so they all came to it feeling a bit nervous, but we just really talked it through. Bonnie and I spoke really technically about it, about the angles we were going to use, so that made everything really comfortable and professional.