Luke Shanahan and David Ngo, the director and producer respectively of the MIFF Premiere Fund-supported Rabbit, answer some questions ahead of the film's premiere next week.

Rabbit explores the metaphysical connection between identical twins while toying with ideas of telepathy, free will and fate. Luke, how did you come to write a screenplay so rich with philosophical concepts? What previous films or literature do you credit as your influence for these ideas?

Luke: It came from a fairly simple chance meeting with an old friend who was an identical twin. One day, while lunching with her, she went pale and told me that she had to ring her sister. She looked annoyed but knew something was wrong. Sure enough, her sister had broken up with her husband. I found this fascinating and, like many, I had heard such tales before but had no idea just how real they were – or could be? She then went on to explain how she didn’t see a lot of her sister because it was too claustrophobic. I found this an intriguing idea as to just how far her “connection” went. Rabbit came from the idea of wanting to explore the potential of a life-threatening event and whether it could create an almost telepathic link between two people.

I was heavily influenced by Orwell and Anthony Burgess’ A Clockwork Orange, but I wanted a fairytale spin to my story and in that respect Rosemary's Baby was a huge influence.

Regarding free-will and fate, I was heavily influenced by Orwell and Anthony Burgess’ A Clockwork Orange, but I wanted a fairytale spin to my story and in that respect Rosemary's Baby was a huge influence. The people pulling the strings appear at first to be quite normal, just like your friendly neighbour; and the fact that our group behaves as if a "normal family” with love and respect for each other makes it even scarier. Who really knows what lurks behind those big gates hiding that mansion in the forest?

Luke, you had previously directed short films, music videos and commercials before shooting Rabbit, your first feature film. Do you think your involvement shooting advertisements and video clips had an impact on the overall stylisation and aesthetic of Rabbit? What specific filmic techniques have you learnt from your previous work?

I began my career working around directors such as Andrew Dominik, John Curran and Justin Kurzel

Luke: I think commercials work teaches you to be concise with your storytelling. When working to a time restriction, detail becomes important and every aspect of the frame is a crucial link to the narrative. I began my career working around directors such as Andrew Dominik, John Curran and Justin Kurzel, who all moved between narrative and commercials work with ease. I like the planning that goes into commercials and clips. You learn that every second matters. Although video clip work doesn’t have a lot of money around it, you teach yourself how to problem solve, which becomes a life saver when making an indie film. With commercials you get a bit more money to play with, and bigger toys, so you can find your style, colour palette and hone your process.

I guess for Rabbit I tried to use elements of both disciplines. I designed everything up front so every department was clear before we turned over. Also, I went to Rabbit with many of my commercial collaborators, even down to my first AD, Travis. We knew how each person worked and what clicked between us. We could move quickly and each department was on the same page and knew the overall tone of the film. 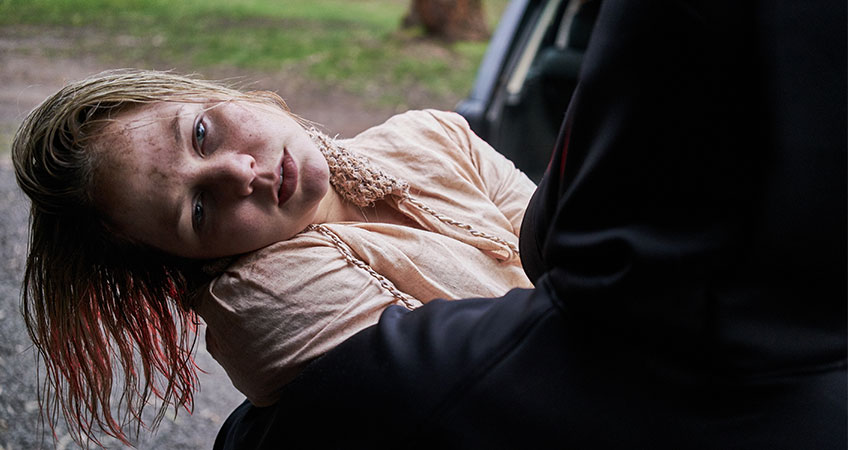 Rabbit was the winning pitch at MIFF 2015's 37ºSouth Market, the prize for which was attendance at London’s Production Finance Market (PFM) to continue the pitching for the financing of the film. David, how integral was 37ºSouth Market in the overall financing Rabbit, and what opportunities do you believe arose from your involvement?

Dave: Winning the prize at MIFF 37ºSouth Market did an enormous amount to boost the exposure of Rabbit. We were suddenly getting emails from all over the world wanting to read the script and by the time Luke and I got back from a whirlwind tour of the globe and the London Production Finance Market, we were 90% of the way there. It was less than six months from its first pitch at MIFF 37ºSouth to green-lighting, and now two years on we’re premiering the film where it all began. That’s lightning fast in making feature films.

During production of the film, a series of unexpected events occurred – including a massive storm, floods and power blackouts. Did these unplanned occurrences help or hinder the overall production of Rabbit?

Dave: You can say that again! Making a feature film is hard enough, but doing it through a freak storm with tornadoes that wipe out all power in the state is something else entirely. One night we were shooting in the hills and a 50-metre high tree, which had been battered by the 200kph winds, suddenly collapsed right behind me. A few steps back and I would have been crushed. The crew rushed outside to see what had happened and all I could think was, “Keep shooting, we’re not doing overtime!” That’s filmmaking.

Making a feature film is hard enough, but doing it through a freak storm with tornadoes that wipe out all power in the state is something else entirely.

Luke: We were hit with everything, yes, and I think that’s where communication and a good relationship between director and producer really counted. On a creative front, I had always wanted a bleakness to my fairytale. We weren't making an outback OZ tale with blue sky and desert. The muted colours, the rain, the wind and the “grey” were just what Anna Howard (DOP), Amy Baker (PD) and myself were after – that sense of Scandinavian grunge in the forest and also around the “big house” was all caught in camera with very little grade work needed on it. But it’s not ideal for production. After we moved the schedule for the sixth time and everything outside had already gone inside, we had, I think, only one day of sunshine. But we got the film done.

What’s next in the pipeline? Do you have any other scripts ready to go?

Luke: Rabbit has opened the doors in the states for interesting work and I’ve a few things in the pipeline. Currently I have two scripts that I’m (almost) happy with.

Rabbit world premieres at MIFF on Saturday 5 August at 6.45pm, with a second screening on Wednesday 9 August, at 9pm. Luke, David and various cast & crew will be at both sessions to introduce the film and take part in a post-screening Q&A.