A Labour of Love: The Metamorphosis of Birds

Critics Campus 2020 participant Isabella Mahoney dissects the representations of memory and intimacy in Catarina Vasconcelos’ The Metamorphosis of Birds.

Towards the end of Catarina Vasconcelos’ debut feature The Metamorphosis of Birds, a father and daughter drag a small wooden boat along a shoreline and drift out into a calm, turquoise sea. With them in the boat is a potted tree – a strange and precious piece of cargo. It’s an ode to Vasconcelos’ grandmother Triz, the central figure in this memoir that fuses documentary and fiction. Similar in style to Chantal Akerman’s News from Home (1977) and No Home Movie (2015), the film expands on the relationship between mother and daughter to include the extended family. As well as being a memoir to a loved mother and grandmother, it is also an intimate portrait of a family unit, exploring the labour of love that is raising children, and the connection between growth and loss.

The film premiered as part of the 2020 Berlin Film Festival’s Encounters program, where it won the FIPRESCI Prize for Best Film. Utilising the voiceover of multiple narrators, including her own, Vasconcelos builds on themes from her debut short, Metaphor or Sadness Inside Out (2014), to explore the ambiguous borders between truth and fiction in a family portrait. Vasconcelos has chosen to shoot on 16mm film, and the depth of colour together with the 4:3 aspect ratio evoke the tactility of domestic life. The film is a kaleidoscopic collage of landscapes of the real and the imaginary, in which relationships between self and Other expand and collapse in an exploration of intimacy and connection.

There is a strong focus on the tensions between the elements of the ocean and the land. Triz longs for her husband, Henrique, who is away at sea, working as a naval officer, while she remains firmly planted on land with their six children. As the small tree drifts out to sea, we speculate about how the family could be commemorating Triz through this gesture. Will they plant the tree on an island far away? Will they release the tree into the ocean in a ritual of mourning? As the boat drifts further towards the horizon, the soundscape becomes more and more noticeable. We hear the undulating sounds of the waves lapping at the shore, drawing us closely into the scene. However, this sound emanates in tandem with a delicate score of piano music, composed by Vasconcelos together with Madalena Palmeirim. The sounds of piano and ocean are heard as two distinct lines that coexist and connect, much like the relationships in the film. 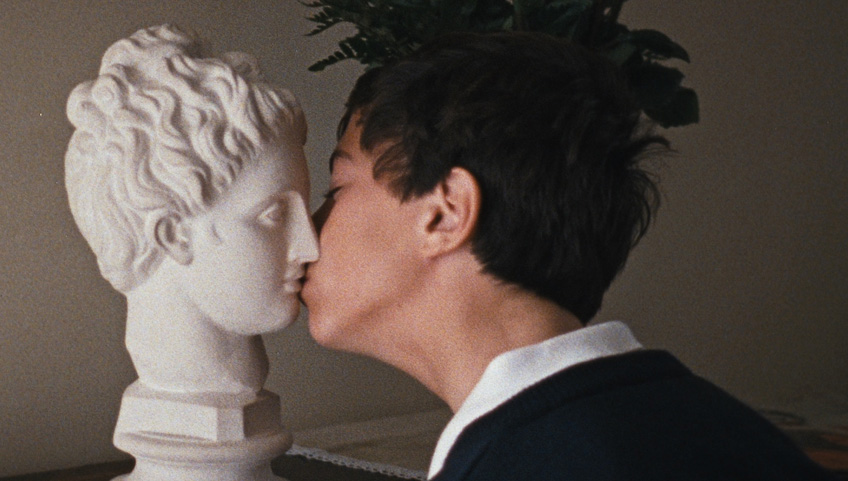 The Metamorphosis of Birds

Through a set of carefully constructed tableaux, the film establishes a nurturing domestic space. We see close-ups of children’s faces, women’s hands, a bird in the family’s backyard, and flowers blooming in time-lapse imagery. There is a strong metaphysical aspect to the film, captured through Triz’s spiritual musings. As Triz and the family’s live-in maid, Zulmira, perform domestic work, the camera focuses on close-ups of their hands and Triz contemplates the origin of the universe:

First came water, then the trees and, after that, the birds. But, soon, she remembered Zulmira and realised that these theories were a waste of time since it was Zulmira who, alongside her, sustained the house’s walls and the children’s roots – who prepared breakfast and changed the sheets.

While God is a strong presence in Triz’s daily life, she understands it is the women’s work that nurtures the children and keeps the house running. This feminist layer is expanded in a series of shots that play with gendered traditions. A daughter contemplates the way power sockets, gendered female in Portuguese, are stuck to the house’s walls. A girl dries her hair while a male narrator describes the things men do: “Making encyclopedias, discoveries, wars.” For a moment, the sound of her hairdryer drowns out the man’s voice. Zulmira, the housekeeper, is an important part of the family. She tells stories to enliven the children’s imagination and teaches them the language of birds. But Zulmira’s role in the film is another question, as her position places her both inside and outside of the family.

Throughout the film there are endless questions from the six children, whom we follow from children to adults. The idea of growth in relation to empathy is explored in a beautiful scene wherein the boy, Jacinto (who is based on Vasconcelos’ real father), experiences growing pains. His growing body is “creating space for a bigger heart, which could now accommodate other things besides his home, his siblings and himself”. Meanwhile, the camera is closely fixed on a bright leaf of a tree as Jacinto paints a single yellow line down the stalk, paying careful attention to its backbone. We feel how Jacinto, raised in a loving, nurturing environment, desires to experience the world beyond his home. Vasconcelos shows how engaging in the world requires the development of empathy, which is captured through the metaphor of Jacinto’s heart literally growing.

As Jacinto grows, his understanding of the world becomes more complex and he begins to question his father’s travels. At one point, we see a montage of a stamp collection from Portugal’s colonies, bearing the faces of colonised people. Looking at the stamps, he imagines their terror when foreign men arrive from the sea. He thinks, “You cannot discover a continent already inhabited by millions.” This complicates the image of his beloved father away at sea, longing for his family. With growth comes a loss of innocence as Jacinto begins to question his own place in the world and that of his family.

Vasconcelos’ experimental techniques – the overlapping narrators and the playful and surprising images – give the film an intimacy that is unusually close. In one scene, the sun sets over the horizon and we hear a woman’s voice. “My mother is in my laughter, in my freckles, in the discussion of God and UFOs.” A bird flies across the sky and we wonder if she is there, too. Triz expresses her love by preparing food, knitting and playing with her children. Her granddaughter’s love is expressed in the making of this film.

The Metamorphosis of Birds screened as part of the MIFF 68½ program in 2020.