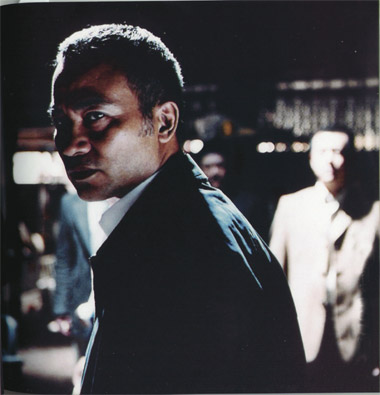 Elections are always tense, but none more than for the leadership of Hong Kong's largest and oldest criminal Triad. The much-acclaimed Hong Kong director Johnnie To brings together a luminous cast in his [Election], a tale of age-old brotherhood traditions meeting cut-throat 21st-century ambition.
The level-headed Lok (Simon Yam) and the megalomaniac Big D (Tony Leung Ka-fai) vie for the chairmanship of the 50,000-strong Wo Shing Triad. Big D will do whatever it takes to win, but Lok defeats him when the respected Uncle Teng (Wong Tin-lam) intervenes. Enraged, Big D prevents the ceremonial baton being transferred to his nemesis, this symbol of power signalling the ultimate transferral of authority. When the baton disappears onto the mainland, the dizzying fury of the Triad society is unleashed and the real power struggle begins, with some ruthless action marking the wresting of the baton.
The stunning visuals of cinematographer Cheng Sui-keung underscore the film's seething narrative tension and To's tight direction delivers a finely tuned action drama.
A guest at last year's festival, the remarkable Johnnie To introduced his [Breaking News] and [Running on Karma] to MIFF audiences, and in 2003 MIFF featured his P.T.U. To's [Election] confirms his cinematic pre-eminence, screening in Official Competition at this year's Cannes Film Festival.
Contains scenes that may offend some viewers
Johnnie To will be attending the festival.---D Johnnie To P Dennis Law, Johnnie To S Yao Nai Hoi, Yip Tin Shing WS Celluloid Dreams TD 35mm/col/2005/101mins
Johnnie To was born in Hong Kong in 1955. His films include [The Mad Monk] (1993), [Running Out of Time] (1999), [P.T.U.] (MIFF 03), [Running on Karma] (MIFF 04), [Breaking News] (MIFF 04).
[Election] screens courtesy of Hopscotch