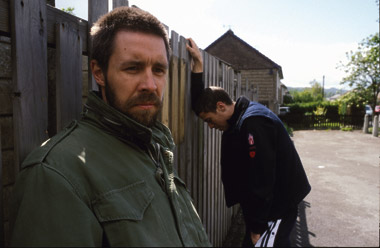 Shane Meadows has fashioned a chilling picture of vengeance in his brilliant and unforgiving [Dead Man's Shoes], a radical shift in tone from his [Once Upon a Time in the Midlands] (MIFF 03) and [A Room for Romeo Brass] (MIFF 00).
Powerfully acted by co-writer Paddy Considine, Richard is a strong and purposeful man, both an anchor and a rudder for his naive and simple-minded younger brother, Anthony (Toby Kebbell). The film opens with the pair returning to their quiet rural hometown, but it soon becomes apparent that dark events of the past lie behind this homeward journey. Richard left the town seven years earlier to join the army, and this is his first journey back. Driven by a tender love for his brother and an overwhelming protective spirit, Richard has come back to strike fear into the hearts of the local thugs who, in his absence, toyed with Anthony. As the film unfolds so, too, do the events that have led to Richard's quest for bloody revenge.
Contains scenes that may offend some viewers---D Shane Meadows P Mark Herbert S Paddy Considine, Shane Meadows WS Element X TD 35mm/col/2004/86mins
Shane Meadows was born in Uttoxeter, England, in 1973. His films include [A Room for Romeo Brass] (MIFF 00), [Once Upon a Time in the Midlands] (MIFF 03).