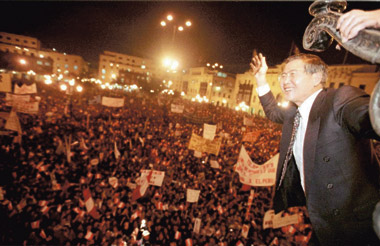 "With remarkable access and a steely, clinical attitude toward her all-too-ingratiating subject, filmmaker Ellen Perry delivers an intimate and deeply disturbing portrait of Peruvian ex-president Alberto Fujimori, a fugitive from justice in his native land and a leader who wielded virtual dictatorial power in his country for a decade.
"Fujimori fought an all-out war on terror, chiefly against Shining Path, but his reliance on secret police chief Vladimiro Montesinos led to its own reign of political oppression, kidnapping, and corruption. From his safe haven in Japan, Fujimori exhibits a myopic view of his own culpability in the wave of murder that wracked his country, which makes him both an outrageous and near-tragic figure.
"This superbly crafted film takes us from Fujimori's emergence out of obscurity in 1990, when he became president, to his collapse of power and exile in disgrace. Dramatic throughout, this explosive documentary offers a riveting account of Fujimori's rise and fall, and his apparent aspirations to rise again!" - Sundance Film Festival---D/P/S Ellen Perry S Kim Roberts, Zack Anderson WS Roco Films International L Spanish, Japanese w/English subtitles TD video/col/ 2005/83mins