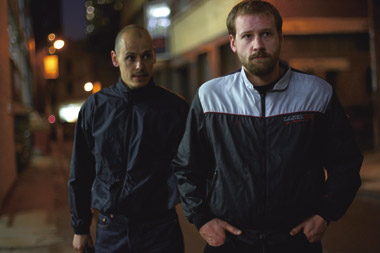 [The Magician] is the tale of Melbourne hit man Ray Shoesmith. As Ray goes about his daily business, he's trailed by a young documentary filmmaker with a camera on his shoulder. He's keeping a record of events in case anything should happen to Ray, a la Pauline Hanson's famous video.
Ray is a professional who takes great pride in his work, whether it's stand-over tactics, kidnappings or straight hits. But he's also a human being: a father, a guy with feelings and weaknesses, and a dry sense of humour. Sharing an affinity with [Chopper], [Man Bites Dog] and early Tarantino, [The Magician] basks in the snappy vernacular and common interactions of its uncommon characters. In the moments when conversation would seem superfluous - to say the least - they come alive.
Made in true guerrilla style, relying on great dialogue and characterisation, [The Magician] introduces us to the much talented Scott Ryan.
Scott Ryan, Michelle Bennett and Nash Edgerton will be attending the festival.
---
D/S Scott Ryan P Michelle Bennett, Nash Edgerton, Scott Ryan WS Moviehouse Entertainment TD 35mm/col/2005/85mins
Scott Ryan was born in Melbourne, Australia, in 1969. [The Magician] (MIFF 05) is his first feature film.