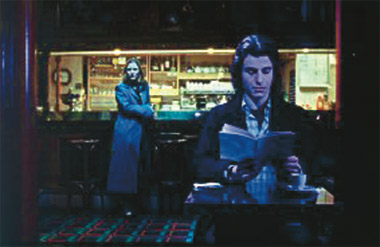 Eugene Green's [Le Pont de Arts] is a wonderfully staged story of love in the city famed for romance. The film's theatrical spirit shares something with the Absurdists, with existential crises driving the action and giving shape to the film.
Green's Paris of 1980 is a Baroque world in which the young classical singer Sarah devotes herself to a new recording of Monteverdi's Lamento della Ninfa. Despite Sarah's heart-rendingly beautiful voice, she is routinely ridiculed by her perversely cruel tutor (a camp de Sadean figure), until in despair she jumps from the Pont des Arts. Pascal, a disillusioned student of literature, is given Sarah's recording of Lamento della Ninfa as a break-up gift from his mismatched girlfriend, Christine. Pascal is so moved by Sarah's voice that he abandons his own plans of suicide. Unaware that the singer has taken her own life, Pascal falls in love with the stranger whose voice saved him from ending his own. His search for Sarah ends one extraordinary morning at dawn on the Pont des Arts.---D/S Eugene Green P Martine de Clermont-Tonnerre WS Mact Productions L French w/English subtitles TD 35mm/col/2004/126mins
Eugene Green was born in New York, USA, in 1947. His films are [Toutes les Nuit] ( 2001), [Le Nom du Feu] (2002, short), [The Living World] (2003).