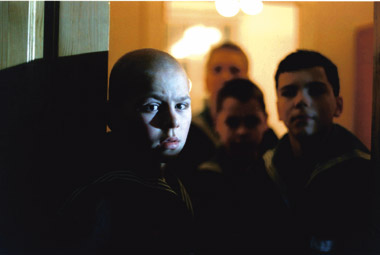 A prizewinner at Venice, IDFA (Amsterdam) and Thessaloniki film festivals, this stunning documentary reveals how the Chechen War has affected children on both sides of the conflict. Room 1, set in a military academy near St Petersburg, portrays the highly regimented lives of the young cadets being trained for future roles in the Russian army. Room 2, filmed in Grozny, Chechnya, shows the widespread destruction wrought by the Russian shelling and bombardment, and a courageous woman rescuing orphaned or semi-orphaned children from the violence. Room 3, filmed in the neighbouring Islamic republic of Ingushetia, focuses on children in refugee camps and in a makeshift orphanage, where they struggle to deal with their devastated worlds. With an artistry reminiscent of Sokurov or Tarkovsky, The 3 Rooms of Melancholia illuminates the emotional devastation wrought on youngsters who have little or no understanding of the historical and political reasons for the bitter conflict. "Walloping... Harrowing... Rapturous... One of those rare films that deserves to be called 'poetic.'" - Variety --- D Pirjo Honkasalo P Kristina Pervila WS Deckert Distribution/Heino Deckert L Russian, Chechen, Arabic, Finnish w/English subtitles TD 35mm/B&W, col/2004/106mins. Pirjo Honkasalo's films include Fire-Eater (1998), Darkness (2000).