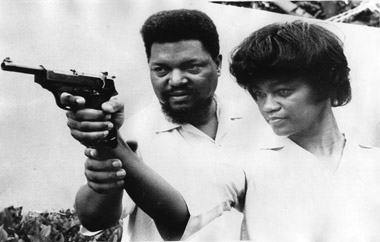 This biography of early civil rights activist Rob Williams focuses on the decade from 1959, during which Williams founded the Black Power movement, dodged a lynching and fled the US for his own safety.
Williams was given a musket by his grandmother as a token of the family's ongoing resistance to oppression. At odds with Martin Luther King's non-violent protest, he took his lead instead from Malcolm X. On more than one occasion Williams produced a gun to break up riots, white mobs and vengeful vigilantes. The Klan marked him for execution.
After mobilising The Black Guard in his hometown of Monroe, North Carolina, Williams loudly and proudly critcised every aspect of the racist South he could fix in his sights. Warned about a crowd baying for his blood, he fled to Cuba where he set up the offshore Radio Free Dixie. He had to seek asylum from the Chinese government before he could safely return from exile in time to exert a profound influence on the Black Panther party. This is an outstanding documentary.
---
D/P Sandra Dickson, Churchill Roberts WS Sandra Dickson TD video/ B&W, col/2003/67mins