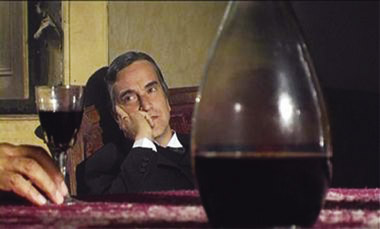 Following more than three decades in exile, acclaimed Chilean auteur Raul Ruiz returns to his homeland to bring cinema audiences [Dias de Campo]. This film was inspired by two stories from Chilean novelist Frederico Gana, as indeed it was by the life of the novelist himself.
Set in a bar in Santiago, two elderly gents sit together and ruminate, each with a glass of wine in hand, a fillip to loosen the tongue. One of the two is Don Frederico, a writer with a novel in progress. The restrained action of this enigmatic film is in the carefully crafted conversation between the two men. Their talk shifts between perspective and slides between tense - they even speak as if they were dead - creating an illusive sense of reality that leaves us wondering just which world these characters inhabit. This is an elliptical and intriguing film that cuts across conventional narrative structures, and it is a film that doubtlessly owes something to the magical realism for which the artists of this continent are well known.