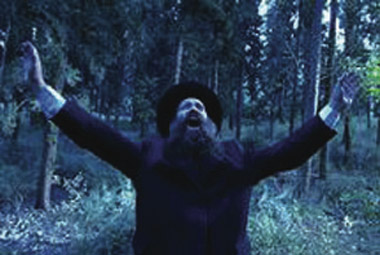 [Ushpizin] is the first feature film ever made in Israel's ultra-Orthodox Haredi community. Filmed where cameras have never been before, with actors and settings unaltered in appearance, it's a tender and funny picture that cleverly toys with the tensions between Orthodox and secular viewpoints. But at heart it's a film about the sometimes unlikely path to acceptance.
Moshe and Mali, a poor, childless Orthodox couple, find themselves penniless on the eve of the Jewish holy day of Succoth. They pray desperately for help and a miracle occurs: they receive an unexpected charitable donation. But a miracle doesn't come without a test, and two escaped convicts, friends from Moshe's shady secular past, appear on their doorstep seeking 'shelter'. Unholy messengers, the guests' outrageous behaviour brings havoc to the Orthodox community and puts Moshe's and Mali's faith to the ultimate test. Shalom Rand - Israel's leading film and stage actor until he became religious and relinquished life in the public eye - is a powerful presence in his return to the screen and helped make [Ushpizin] a huge critical and commercial success in Israel.
---
D Gidi Dar P Gidi Dar, Rafi Bukaee S Shalom Rand L Hebrew, Yiddish w/English subtitles WS Lightning Entertainment TD 35mm/col/ 2004/90mins
Gidi Dar was born in Haifa, Israel, in 1964. His films include [Eddie King] (1992), [Shine] (2000).