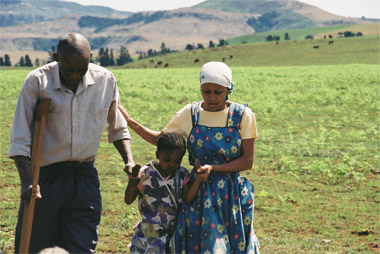 Zululand, South Africa. Yesterday (Leleti Khumalo), a woman in her early 30s, and her seven-year-old daughter Beauty are on the way to the nearest clinic. Yesterday has a lingering cough and wants to get it checked. After untold difficulties gaining access to a doctor, she learns the terrible news that she's contracted HIV/AIDS. Has she had sex with anyone other than her husband' Does she use condoms' Yesterday stares despairingly at the doctor, wondering how this could have happened. Life in a remote village could never have prepared her for this.
A heartfelt and sensitive story, [Yesterday] portrays the devastating social consequences of AIDS through the prism of one brave woman's life. It was nominated, this year, for the Oscar for Best Foreign Film.
"A very simple, yet powerful story. In our fight against HIV/AIDS, we need these kinds of stories which tell us not only about challenges, about difficulties and the tragedies but also, at the same time, those that tell us about hope, and [Yesterday] is about hope." - Nelson Mandela
---
D/S Darrell Roodt P Anant Singh, Helena Spring WS HBO Films, London L Zulu w/English subtitles TD 35mm/col/2004/96mins
Darell Roodt was born in Johannesburg, South Africa, in 1963. His films include [A Place of Weeping] (1986), [Sarafina!] (1992), [Cry, The Beloved Country] (1995).