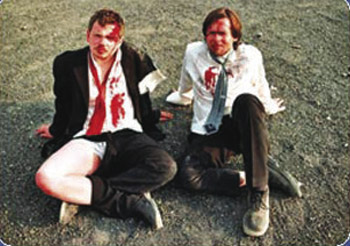 [Czech Dream] is a story of a glorious large-scale hoax. What began as a graduation project by two film-school students soon escalated to become a mass media event, one that variously disgusted, excited and provoked the nation. When Vit Klusak and Filip Remunda began to build a marketing campaign for a fictitious hypermarket, Cesky Sen (Czech Dream), their intention was to demonstrate the power of media manipulation and the consumerist spirit that was sweeping the Czech Republic.
The filmmakers place themselves in the centre of the action as the managing directors of the new venture. With the help of image consultants they are transformed into perfect corporate players, with smooth manners, big ideas and expensive suits. Thus begins the manipulation. Overseeing every aspect of the perfectly targeted campaign - with the right amount of idealism to be telling, convincing and hilarious - they lead a believing public towards the grand opening of the new venture, a home-grown hypermarket that the whole nation can be proud of.---D/S Vit Klusak, Fhilip Remunda P Hypermarket Film Ltd WS Taskovski Films L Czech w/English subtitles TD 35mm/col/2004/87mins
Vit Klusak was born in the Czech Republic in 1980. His films include [Digestive] (1999, short), [Ocet] (2001, short), [Vlast a Burian] (2003). Filip Remunda was born in the Czech Republic in 1973. His films include [Obec B] (2002, short), [A.B.C.D.T.O.P.O.L.] (2003).