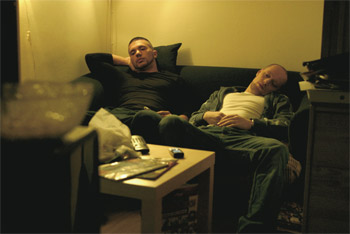 Enter the violent world of petty crims in urban Oslo. Aksel Hennie and Jon Andreas Andersen's remarkable [Uno] is an absorbing tale of courage and conviction, right and wrong, friendship and responsibility, told through the gritty realism of the street.
David, played by Hennie himself, works at an inner-city gym and is part of a gang that includes his best friend, Morten, gym-owner Jarle and his quite stupid son, Lars, and the monstrous Khuram. Their illicit activities revolve around trafficking steroids, and it is this part of gym life that David embraces only reluctantly. The other world David inhabits is with his family: a father who is terminally ill with cancer, a mother who he has largely shut out, and a brother, Kjetil, who has Down's Syndrome. David takes refuge from the inertia and silence of his family in the brotherhood of the gym. But the day David's father is on his deathbed, he is forced to choose the moral code by which he will live his life, and he must endure the ramifications of his decision.
---
D Aksel Hennie P Jorgen Storm Rosenberg S Aksel Hennie WS NonStop Sales L Norwegian w/English subtitles TD 35mm/col/2004/103mins
Aksel Hennie was born in Oslo, Norway, in 1975. [Uno] (MIFF 05) is his first feature film.