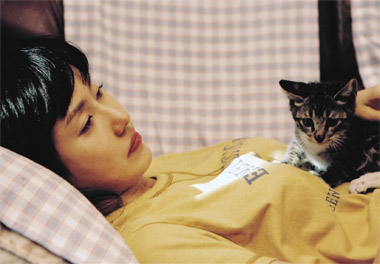 Winner of Pusan's New Currents section, [This Charming Girl] is a perfectly calibrated and unusually subtle portrait of a self-contained young woman.
Jeong-hye is a clerk in a small suburban post office, who lives on her own and goes through the same routine every day. Attractive and neat but very detached, she keeps a polite distance from her work colleagues. Privately she grieves the death of her mother, the only member of her family who did not condemn her for walking out on her husband on their wedding night.
The film delivers its magic in its detail - everyday nuances, looks and gestures that ring true - and is held together by Kim Ji-su's graceful performance as the lead character, who, driven by a nebulous dissatisfaction with her life, reaches out to a virtual stranger for emotional support.
"[This Charming Girl] is a minor miracle, not just for its feminist politics but also for Lee's filmmaking precision and his ability to convey the unspoken and often unconscious deployment of power." - Film Comment---D/S Lee Yoon-Ki P Lee Seung-Jae WS Showbox/Mediaplex Inc. L Korean w/English subtitles TD 35mm/col/2004/99mins
Lee Yoon-ki was born in Daejeon, South Korea, in 1965. His films include [My Kind of Love] (1995, short), [This Charming Girl] (MIFF 05).