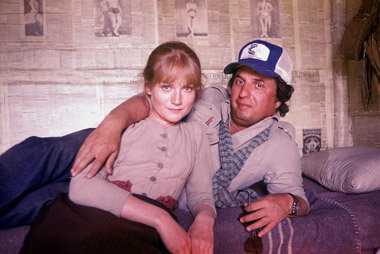 final cut: the making and unmaking of heaven's gate (2004) [feature]

In 1980, a $44-million movie flopped and took a major studio with it. [Heaven's Gate], was the epic western Michael Cimino made while drunk on the success of the Oscar-winning [The Deer Hunter]. As the director's budget blew out to five times that of a regular Hollywood blockbuster, chaos took its toll.
"The biggest flop in Hollywood history. 'It takes a lot in this town to ruin a career,' says the documentary's narrator, Willem Dafoe, 'But there is one sin for which Hollywood has always been unforgiving: failure.'
"It was a western, set in Wyoming in 1892, about the Johnson County War, which Cimino interpreted as a government-sanctioned slaughter of immigrants. He was fanatic about period authenticity, no matter the cost (the construction of an entire town and antique roller skates for hundreds of extras). The film's failure destroyed United Artists financially.
"[Final Cut] is an intriguing story, with on-camera input from many of the people involved and apt comparisons with other notorious film disasters. Jeff Bridges kept the whorehouse set as a country home." - New York Times---D/P Michael Epstein S Stephen Bach, Michael Epstein WS Films Transit TD video/col/2004/78mins