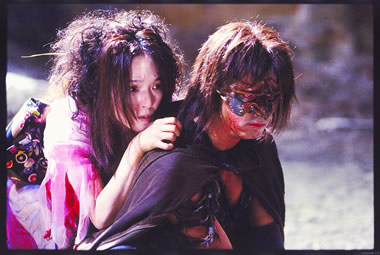 Since his [Audition] (MIFF 00), Miike Takashi has gained a cult following in the West, and [Izo] is sure to compound his reputation. [Izo] confounds easy description, and even Miike says of the film: "It doesn't fit any genre". But this splatter flick is underpinned by a particular philosophy; Miike combines non-stop extreme fighting, documentary footage and even a 1960s' hippie musician to convey his apocalyptic philosophy of pure negation.
Known as 'The Slaughterer', [Izo], an anti-shogun samurai warrior, was put to death in 1865. But this fearsome swordsman was no easy force to eliminate and his vengeful spirit remains. He is bent on exacting revenge, and he returns through the generations in several malevolent incarnations to destroy all, including the president (played by Miike) and his mother. The Slaughterer's ultimate target is the emperor himself, the supreme representative of authority.
"Nothing can stop him, because Izo is negation itself: the contradiction spewed up by the 'perfect system' that is Japan... Is this a demolition of Japan's body politic'" - Rotterdam Film Festival
Contains scenes that may offend some viewers---D Miike Takashi P Taizo Fukumaki, Fujio Matsushima S Shigenori Takechi WS Excellentfilm Co. L Japanese w/English subtitles TD 35mm/col/2004/128mins
Miike Takashi was born in Osaka, Japan, in 1960. His films include [Shinjuku Triad Society] (1995), [Audition] (MIFF 00), [Gozu] (2003).