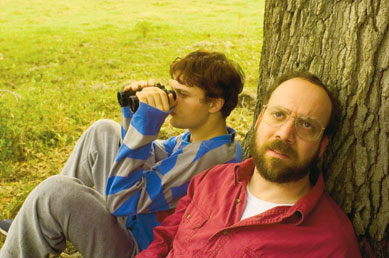 The Hawk is Dying screened as part of Director's Fortnight at this year's Cannes Film Festival.
Character actor of the moment Paul Giamatti (Sideways, Cinderella Man) turns in another consummate performance in The Hawk is Dying, based on the 1973 novel by Southern writer Harry Crews.
Giamatti plays a dirt-poor auto upholsterer, who lives in Florida with his sister and her mentally challenged son. He has occasional sex with a 20-something stoner and is on a one-way road to misanthropy. The only passion in his life comes from training hawks, although even his falconry skills are dubious. This passion becomes pronounced when he catches a magnificent red-tail hawk, a bird he's single-mindedly determined to tame.
“Paul Giamatti's incredibly powerful performance as (George) Gattling, an earnest man who finds himself a fish out of water in his own life, firmly holds the emotional center of this daring and confident film. Entirely original, The Hawk is Dying is a beautiful and metaphorical film rich with genuine emotion and unexpected epiphanies.” - Sundance Film Festival