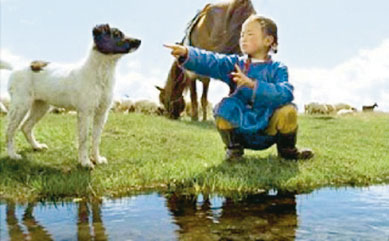 Following the hugely successful The Story of the Weeping Camel, Mongolian-born and German-trained filmmaker Byambasuren Davaa delivers a thought-provoking and gentle mélange of documentary and drama in The Cave of the Yellow Dog.

Where her debut film often favoured nature over humans, this time round Davaa places her flesh-and-blood subjects centre stage.

A little nomad girl named Nansal stumbles across a baby dog, which she affectionately names Zocher (Spot). Against the wishes of her father, who believes the dog is responsible for attacking their sheep, Nansal wrestles with the decision of whether to take Zocher with them or leave the dog behind. Soon, the family is indebted to Zocher and see the good in his soul.

“Featuring a real-life family and following much of their daily existence, this is combined with a narrative structure that acts as a framework for the film. The naturalistic pace reflects the quiet, often uneventful world that the family inhabit but this underlines a still beauty that is realised throughout.” - London Film Festival

Byambasuren Davaa was born in Ulan Bator, Mongolia, in 1971. Her films include The Story of the Weeping Camel (2003).