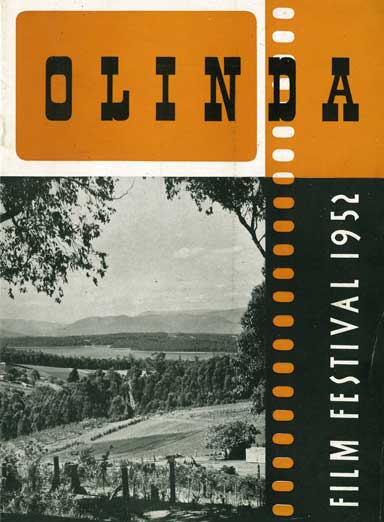 Please note that film synopses were not individually written and detailed in the 1952 guide. The following link will provide a list of film titles only
Full Program

Program In Focus
The first Melbourne film festival program categorised films by topic or subject including Scientific films, Educational, Art on Film, Classroom and Instructional films. There was a focus on religious films, and discussion sessions including the role and tasks of the film crew, film society problems, censorship and the role of film in society. The remainder of the program was organised by country of origin and included films from Britain, Australia, China, USSR, United States, Canada and early Australian films. Feature films screened included Mike and Stefani (R. Maslyn Williams), La Belle et la bête (Emile Darbon and Jean Cocteau) and Louisiana Story (Robert J. Flaherty).

In every State of the Commonwealth there have been in existence for some years film societies devoted to the study and appreciation of the more serious and cultural aspects of the cinema. New South Wales and Victoria each sustain more than a score of film societies, the largest of which have several hundreds of members. Film societies are active also at Canberra, location of the National Library, which is the Australian source of many film classics. The Victorian and New South Wales societies are banded together in Federations. There are also flourishing film societies in the smaller capital cities, notably in Adelaide, Brisbane, and Hobart, but so far there has not been sufficient interest to justify the formation of federations in these States.

During January 1950, the New South Wales Federation held a week-end convention at the seaside resort of Newport and invited to it representatives of the other States, with the object of forming an Australian Council of Film Societies to act as a national body for the importation of films from similar organizations overseas and to enable the whole film society movement to speak with one voice on matters affecting the common welfare. ACOFS came into existence at Newport, and assembled there again during January 1951. At this meeting, just a year ago, the Federation of Victorian Film Societies offered to stage a convention in Victoria for the ensuing year. The offer was accepted, and the choice of location fell on Olinda. The dates werefixed to embrace the Australia Day week-end when we commemorate the foundation of British settlement with the landing of Captain Arthur Phillip at Sydney Cove on January 26, 1788.

Films among the Bluegums

The little mountain township of Olinda in the Dandenong Ranges just 30 miles from Melbourne seemed the ideal place for a film convention, especially as there would be an enthusiastic welcome from the Olinda Film Society.  The Victorian Federation decided to expand the gathering to a Festival and issued invitations to all who wished to come. The response was so great that several guest-houses and all the local halls were engaged, while plans were drawn up for an outdoor theatre among the trees for screenings during the warm summer nights.

Alms of the Festival

• To provide a suitable background and occasion for the presentation of the   Commonwealth Jubilee Awards, and to give all interested a chance to see them.

• To enable the Australians Council of Film Societies to hold its Annual Meeting and transact its normal business.

• To bring together Australian film enthusiasts so that they may see films which would not otherwise be available and to encourage these film enthusiasts to talk films, think films, and exchange views to their mutual advantage.

• To enable people to hear words of wisdom from the acknowledged experts and leaders of the film movement.

• To provide professional help for the users of every type of film.

• To give publicity and impetus to the Australian film movement and inspire those interested in films to greater efforts.

The Tinder was Dry

And so the scope of the Festival at Olinda grew as more groups of film enthusiasts elected to participate — amateur film-makers, scientific film users, film librarians, professional producers, and those who use films to spread the word of God. This brochure tells something of the films selected for screening, introduces some of the leaders of the Australian film movement, and sets out in type their thoughts on the filmic subjects on which they are authorities. The Olinda Festival breaks new ground, and like all pioneers those who take part in it must pay the price of their audacity. Obviously the Olinda organization will fall short of perfection and unforeseen difficulties will arise. For any ensuing inconvenience, the committee apologizes in advance, and asks you to accept Olinda's delights and tribulations in the spirit of adventure that should go with all new enterprises.

Is this Festival to be made an annual event, or is it a unique and complete phenomenon, no more able to be reproduced than a daguerrotype?   Some people think that Olinda should be the birth place of a continuing organization of all film users, others talk of a national festival staged in different States in turn. The Organizing Committee, whose imagination carries it no further than midnight of January 28, 1952, leaves to those who attend the Festival the answers to these questions. But it is certain that by gathering together more films and more film people than have ever congregated before in Australia, the Olinda Festival cannot fail to stimulate activity and interest in the sections of the film world participating, In this tangible sense the effects of the Olinda Film Festival will be  both real and permanent.

Introduction taken from the 1952 official guide