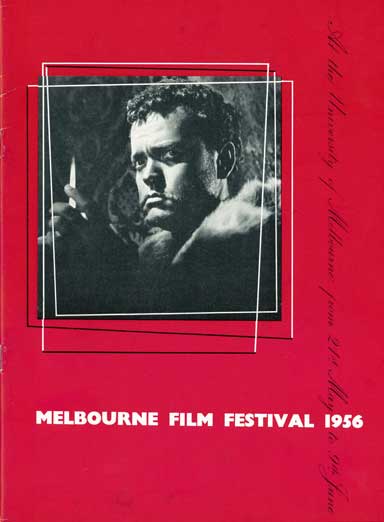 Program in Focus
The 1956 program grouped feature films into 6 programs of double features, with screenings spilling over into day sessions on the weekends. Retrospective films screened included Threepenny Opera (G.W. Pabst, 1931) and The Atonement of Gosta Berling (Mauritz Stiller, 1923), starring Greta Garbo. Films of note included Seven Samurai (Akira Kurosawa, 1954) and for the 5th year discussion sessions and films centered on the theme of Film and the Child were programmed. Over 13 foreign countries participated in the 1956 festival, introducing Melbournians to films from Poland, Brazil, India and China.

Once again a co-operation amongst various groups concerned with the cinema has made the Festival possible.

It has became the meeting place for everyone who is seriously interested in the film, and it is now firmly established in the cultural life of our community.

This year we have entered a new phase of consolidation developing the Festival within the general pattern evolved in earlier years.

It has always been the aim of the Festival to present the widest range of films from all parts of the world, especially those films which are unlikely to reach our local theatre screens.

On this occasion we are delighted to be ale to screen feature from thirteen countries, and all of them major productions. This contrasts with the rather restricted coverage available to us at earlier festivals. The growth in status of the Festival is further demonstrated by the action of three overseas Governments in officially entering films for exhibition.

We hope to continue our development and make the Melbourne Festival equal to the world best.

Introduction taken from the 1956 official guide