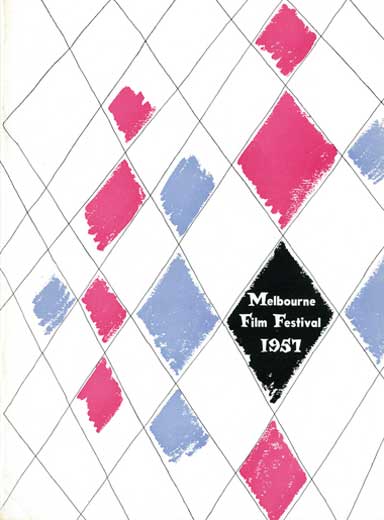 Program in Focus
The 1957 Festival, the first for Director Erwin Rado, grouped feature films into 6 programs of double features, and shorts continued to be grouped by topic, including Russian Cinema in Retrospect, Faith and Fantasy and Malayan Scene. Satyajit Ray's debut feature Pather Panchali was screened, commencing a long standing admiration of Ray's work by the festival that culminated in a visit by the Indian director in 1968.

With 6 more features and 22 more short films screened than the previous year, the 1957 program featured 110 films from over thirty countries, and now included films from countries not previously screened in Australia, including Puerto Rico, Portugal, Bulgaria, Greece, Norway and South Africa.

The Sixth Melbourne Film Festival will present over one hundred films from thirty countries – films which the Organising Committee believes show some advancement  towards cinematic art or towards knowledge.

A number of countries, including Puerto Rico, Portugal, Bulgaria, Greece, Norway and South Africa, will be represented for the first time in this annual event in the cultural life of Melbourne. The addition of films from these countries is indicative of the Organising committee aim to make the Melbourne Festival international in character and equal in stature to the best overseas film festivals

A programme of specially selected Festival films for senior secondary school children on three mornings at the Union Theatre. Our aim in devising these sessions has been to demonstrate to the young people the type of films a film society can offers to its members.

Around Film Polski gathered some of the best of Poland's artists, young artists like Jan Lenica, and representatives of an older generation, such as Eryk Lipinski, one of the founder of the Polish Poster School, born in 1908. These artists have created poster art, designed in a tradition of taste and elegance which is distinctly Polish.

Film Polski made a gift of the posters to the Festival and their generous gesture will make it possible to circulate this exhibition throughout Australia.

The Australian Institute of Management will present a one day conference on “The use of film in Industry and commerce” in the Physics C. Theatre on Tuesday 4th of June.

Introduction taken from the 1957 official guide