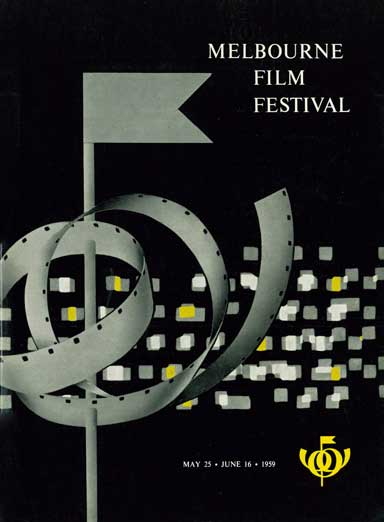 Program in Focus
The 1959 program moved away from the educational and nature documentary-type short films of earlier programs, to include more feature films. Some of the major films shown included Kurosawa's Throne of Blood, Bardem's Calle Mayor, Kautner's The Captain from Koepenick and Chmielewski's No Place for Eve to Sleep. A lack of subtitled prints for Italian and French films meant more Spanish, Norwegian, Filippino and Romanian cinema was featured.

This year marks the establishment of the first Australian Film Festival. By co-ordinating the activities of various festivals, communities in four of our capital cities - Adelaide, Canberra, Melbourne and Sydney - will have access to films acquired from overseas for a brief period of five weeks during May-June 1959.

While the overall organisation of collecting entries from all parts of the world and allocating them to the various festivals was undertaken by the newly established Australian Film Institute, the actual running of each festival is in the hands of autonomous groups in each city.

From a large number of entries, the Institute selected fewer for participation than were accepted in the past few years. This residue of higher quality films will be shown in the eighth Melbourne Film Festival. It is regrettable that there are no Italian or French feature films in the programme. This absence is due to the fact that no English sub-titled prints of suitable films could be made available to the Festival this year. However, we are pleased to include for the first time Spanish, Norwegian and Philippine films; together with two world-famous productions from Mexico and Denmark, which the Festival has tried to import for many years.

Once again, the Melbourne Film Festival has enjoyed the official recognition of the International Federation of Film Producers' Associations, which made it one of the eight endorsed non-competitive festivals in the world.

Unique in character by being organised by a non-commercial film organisation on a yearly membership basis, the Festival will be guided by the same single-minded aim as in the past: to bring the highest achievements of cinematography to this country for the benefit of the selective film-goer, and for the improvement of the film-fare appearing on commercial screens across the nation.

Introduction taken from the 1959 official guide