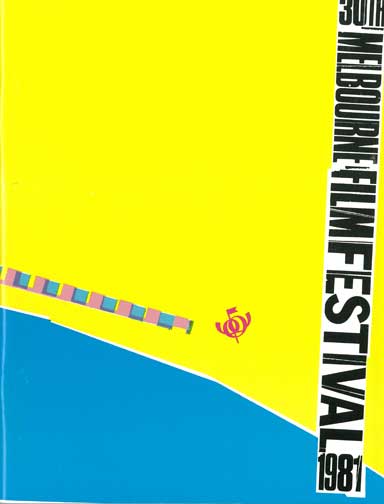 Program in Focus
The 1981 program featured Treasures from the British Film Archive, nine films curated in order to salute the invaluable work done for more than 45 years by the British Film Archive. Films from this section included Juno and the Paycock (Alfred Hitchcock, 1936), M (Joseph Losey, 1951) and The Phantom of Moulin Rouge (René Clair, 1924).

This piece is intended to be part editorial, part information and part explanation. It is not an attempt to formulate any theories about the films to be discussed, nor to group the works together as the product of an international movement. Its concentration is solely on those directors whose features are being screened for the first time at the Melbourne Film Festival.

I should like to preface my observations with a personal reminiscence. It has always seemed to me that my commitment to the art of film was most strongly established and reinforced in the post-Nouvelle Vague years of the mid- 1960s when the Melbourne Film Festival was showcasing the work of what seemed to be an endless list of young and unknown directors.

These directors were not just new names, but people who added new images, methods and languages to the art. Many have endured to become establishment figures, still contributing, but now fully absorbed into the international production system.

It all seemed a period of genuine vitality and excitement. But by the time Jerzy Skolimowski visited Australia in 1971, the sense of discovery seemed to have vanished and the international critical establishment no longer seemed to be interested in 'discovering' ft as such.

Directors have continued to break in — there have been several dozen in Australia alone — and it seems to me that the primary role of festivals is to present their work. It is often only in such presentations that the new director makes an impact. It is the film festival as an event in itself, that can give a special aura to the work of new directors and the genuinely original new work of others. It is not necessary that the work be perfect, but it is necessary that it show originality and invention. Thus the following films have been selected for screening as part of the New Directors, New Directions series at the 1981 Melbourne Film Festival.

First screened at the 1980 Edinburgh Film Festival and since screened at London, Berlin and Hong Kong, Blind Spot firstly triumphed by being made at all. Claudia von Alemann borrowed the money and personally guaranteed all debts and had to close down production for some months while she had a baby. The film's interest lies firstly in its impact as a feminist view of history, secondly in its application of what might be described as a feminist 'style' — the use of real time, the rigorously objective camera, and an extra- ordinary use of sound. This last creates a stylistic achievement most noticeable in the film's closing scene, described by Tony Rayns as "a wonderful duet for violin and passing train", and more seriously by Paul Willemen: "History and her story become a network of resonance, summed up in the sound of a 17th century violin played and recorded in 1979, transferred on to a 16mm film soundtrack and replayed in cinemas with different sound/projection systems."

The most astonishingly assured debut for some time is the sole Hungarian feature in the 1981 Festival. A Priceless Day won the Opera Prima prize at the Venice Film Festival last year and stood out head and shoulders above the competition. Peter Gothar, a stage director with some television experience, has made a film of considerable maturity and complexity and one must go back to Istvan Szabo's Age of Daydreaming in the early 1960s to find a Hungarian debut film of even remotely similar quality.

Feminists may not appreciate this one, in which, said critic Mari Kuttna, "the sexual involvements of four jet-setting Beautiful People are presented with all the artificiality of a rococo ballet." It has also been described as a cobweb film — try to seize it and it falls apart. But I liked its sense of atmosphere and character and its depiction of a silly, over-romantic world. A slight sense of satire saves it from a dreadful seriousness. Mary Stephen has not yet made a satisfactorily complete film, but I think she has the potential.

It is unusual for a Japanese debut feature to emerge into the West straight after its production. This film by Mitsuo Yanagimachi chronicles the new Japanese youth, their proneness to violence and their fascist tendencies. A mysterious and strange film, but one which marks a decisive step into the international arena.

Woman's Greatest Value is Her Silence

Gertrud Pinkus' film was the biggest surprise of the Mannheim Filmwoche last year. It came out of nowhere, unheralded, and got the only real ovation.

The most notable and encouraging aspect of American production over the last few years has been the development of an organized method of screening and marketing the many American films made outside the aegis of the major studios and distributors. Some of the filmmakers have a foot in both camps. One such is John Sayles, whose first film as a director, The Return of the Secaucus Seven, has been described as the best film ever about the Vietnam generation's passage into early middle-age. Sayles has also worked within the system as scriptwriter for Alligator and The Howling, both already acquiring cult status as superior examples of the shock horror genre.

Films such as The Return of the Secaucus Seven (John Sayles), A Circle in the Fire (Victor Nunez), Until She Talks (Mary Lampson), Liar's Dice (Issam Makdissy), A Jury of Her Peers (Sally Heckel) and Permanent Vacation (Jim Jarmusch) are all ultimately products of the long mainstream tradition of narrative cinema. Their interest lies in each director's skilful exploration of a new subject. These directors are, however, working outside mainstream studio production and may have little desire to join it. In this respect and in its strongly regional character this strand of production has emerged as one of the most striking trends of the last few years.

Following the Edinburgh Film Festival, I reported in Cinema Papers that "the British cinema may be alive, but it would, however, seem to be more lively in those areas of work being sponsored by the British Film Institute Production Board and a few other government bodies which give independent filmmakers a chance."

From the BFI we will be presenting Brothers and Sisters (Richard Woolley), Exchange and Divide (Margaret Dickinson) and also the most strikingly original film of 1980, Peter Greenaway's The Falls.

This is the film which won the prize for the best film screened at the London National Film Theatre last year. Greenaway is the first British director to win the prize and joins such illustrious predecessors as Jean-Luc Godard, Jacques Rivette, Robert Bresson and Theo Angelopoulos.

The Falls is a non-narrative fiction telling of the lives of just 92 of the 19 million victims of the Violent Unknown Event. As far-fetched as it may seem. The Falls creates — even more than, say, Fellini — its own universe. Colin Cantlie's measured verbal delivery combines powerfully, episode by episode, with Greenaway's eye for the bizarre and imaginative use of whatever means are available, including his old films, to construct a new England.

I cannot claim much knowledge of the work of the New York avant-garde or other American filmmakers of that orientation. I have seen some films by Hollis Frampton, Michael Snow, Stan Brakhage, Gregory Markopoulos, Jonas Mekas and a few others. It has not been a major concern and I have until now rarely sought out its work.

The two feature films we are screening in this connection are Grand Opera (James 1 Benning) and Working Title: Journeys from ' Berlin/1971 (Yvonne Rainer).

Grand Opera, subtitled A Historical Romance, is James Benning's film of his life till now. His concerns are also with American icons, ranging from Mount Rushmore and the American Flag to soap opera TV serials. His technique is associative and he claims that the film signifies the end of his concerns with structuralism. An article in the New York Downtown Review may provide some enlightenment:

"After the screening of Grand Opera, James Penning began talking to Yvonne Rainer. Benning admitted to her something I have suspected for some time, that he is a narrative filmmaker. Benning is a story-teller, especially of stories about story-telling. Grand Opera begins with the telephone conversation from Michael Snow's Wavelength in which Amy Taubin phones an unknown person that a dead man is there on the floor in front of her. This has been widely interpreted as the narrative within Wavelength which is superseded by the film's formal concerns. Like Snow, Benning attempts to resurrect the body of narrative in strictly formal terms; however, Benning is more directly concerned with the nuts and bolts of film grammar as derived through the history of film. His own films help to form a bridge from structural films to a re- emergence of narrative in avant-garde film. The narrative he predicts would differ from earlier conventional counterparts, however, it would be determined by formal qualities rather than the personalities or motives of the film's characters. These films would be structural narratives, marking a return to 'story-telling' by those filmmakers familiar with structural films."

Yvonne Rainer features in Benning's film and is also represented in her own right with her latest film Working Title: Journeys from Berlin/1971. This is a complex work described as a series of free associations on the subject of terrorism. It will undoubtedly repay multiple viewings and we can be grateful to the National Film Library for making us aware of Rainer's work.

Notice should also be given to a small (10 minutes) gem, New Jersey Nights by Veronika Soul. Soul shared the Grand Prix at Melbourne last year for Interview which she made in collaboration with the Canadian animator, Caroline Leaf. New Jersey Nights is a more personal work, a collage of past and present, moving images and stills, all constructed to elaborate on her title as moments of visual beauty tumble into witty verbal puns, reminiscences collide with romance.

As it has always done, film is moving not in one new direction but in dozens. Probably nobody can keep pace with them all. Our selection therefore, heavily weighted as it is towards narrative, is intended to be only a sample of the best work being done. We shall need to monitor developments for a number of years to see finally where each filmmaker is headed.

Introduction taken from the 1981 official guide