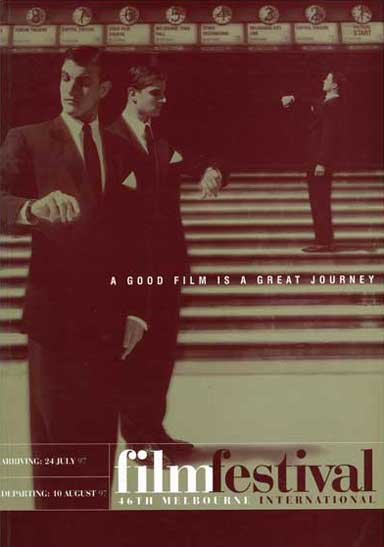 Program in Focus
The first program helmed by new director, Sandra Sdraulig, saw the entire MIFF program organised into genre and topical streams. The features section was divided into International and Regional along with following sections: Young Asian Cinema, Australian, Made in Spain, Mediterranean Masterpieces. Mayhem, Magic and Maelstroms (which focused on the Japanese Animation Form Studio Ghibl) and films on jazz were also programmed.

Filmmaker in Focus
Sergio Leone. A retrospective of his films was screened.
{focus Sergio Leone}

This is my first year as the executive director of the festival and I see 1997 as one of consolidation, setting the foundations in place for the years to come. It will be the first step towards a bright and expanded future for the festival.

My sights are set on 2001. Not the Stanley Kubrick film of the same name, but the year in which the Festival celebrates its 50th anniversary.

I intend this festival to be a taste of things to come: bold, challenging and stimulating, celebrating cinema in all its rich diversity. You will have the opportunity to sample the latest and the best cinema from Australia and around the world.

This year's festival includes 180 films from nearly 40 countries, providing a cinematic window into different cultures, religions, social practices, methods of storytelling and visual expression. You will be introduced to some great new talents and trends, and will get an opportunity to revisit and reevaluate the work of established directors like Sergio Leone and Theo Angelopoulos.

The spotlights - Made In Spain, Young Asian Cinema, All That lazz and Mayhem. Magic & Maelstroms - will alert you to the productions of flourishing industries. I encourage you to also catch the short film and documentary programmes, formats that are rarely given cinema exposure.

Enjoy 17 days and nights of film discussion via forums, lectures and informal talks. Meet the filmmakers, the stars, the critics, the scholars and the buffs. This is your passport to globetrotting from the comfort of your cinema seat so sit back and enjoy.

Introduction taken from the 1997 official guide