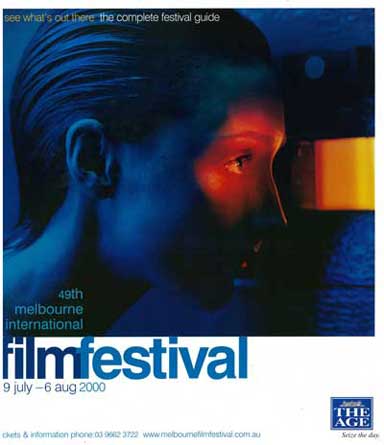 Program in Focus
With a new millennium came a bigger program for MIFF audiences. 277 films were grouped under categories such as New French Cinema, International Panorama, Australian Showcase, 100 years of Luis Buñuel, music films and Citadel - video exploring the city limits. A retrospective of the work of Ken Russell - labelled the Bad Boy of British cinema - was also screened.  A program of contemporary experimental film and video looked at titillation in the moving image.

Filmmaker in Focus
Seijun Suzuki. A retrospective of the filmmaker's work was screened.
More

Filmmaker in Focus
Claire Denis. A retrospective of the filmmaker's work was screened.
{focus Claire Denis}

Welcome to the 49th Melbourne International Film Festival and prepare yourself for 18 days of new and exciting cinema from all corners of the globe. This year's theme "See what's out there" recognises that intrinsic to film is the element of voyeurism and spectatorship and encourages you to both indulge and challenge your senses.

In seeing what's out there we also promise to introduce a generation of bold and brave filmmakers, to expose trends in world cinema and explore the ever changing possibilities for the future of film.

The cornerstone of this year's programme is a tribute to the films of France. Unfortunately it's only possible to include a mere sample of this country's extraordinarily innovative rind dynamic work. Nevertheless it demonstrates both a deep appreciation of their output and is a formal acknowledgment of their tremendous status in this industry

Complimenting our Spotlight on French Cinema is a retrospective of the work of Claire Denis, a rare filmmaker who has consistently produced films of exceptional poetic and sensuous quality.

The festival also marks the centenary of the birth of Surrealist master Luis Bunuel with a selection of films representing the power of his visual imagination and the playful wickedness of its form.

Films from the Asia Pacific Region are only infrequently released theatrically in Australia consequently the festival plays a crucial role in highlighting both work and talents from our near neighbours. Following on from our recent tribute to Tezuka, Takeshi and Studio Ghibli we will present Violence and Beauty an examination of the career of stylish and controversial Japanese director Seijun Suzuki. This Spollight is bound lo inspire and provoke and as with the focus on Ken Russell, includes films rarely seen.

I hope that this celebration of cinema with its many themed and varied forms, offers you a unique way of seeing what's out there by staying indoors.

Introduction taken from the 2000 official guide