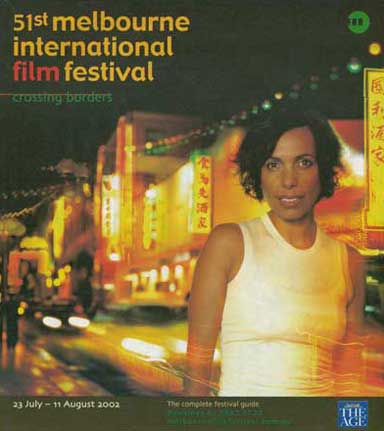 Filmmaker in Focus
Kim Ki-duk. A selection of the filmmaker's work was screened.
{focus Kim Ki-duk}

Welcome to the 51 st edition of the Melbourne International Film Festival and my second as Executive Director. The slogan for this year's Festival, 'Crossing Borders', is intended to underline the role of film, and ultimately our Festival, not just as an escape from the rigours of our daily lives, but in tracing the political, cultural and social seismic shifts around us.

Our Australian Showcase gives voice to contemporary Australia in all its diversity. The intense dynamism of the Asian region is expressed in discovering the new generation of Asian women filmmakers to the tornadoes of Japanese renegade Mike Takashi, plus at the Festival's very centre in the uncompromising work of South Korean Kim Ki-Duk.

Short films are again at the heart or this year's Festival with surveys of filmmakers Jeunet and Caro, the Brothers Quay plus the irrepressible Phil Mulloy and, of course, the International Short Film Competition.

Whether it's new work by Godard, de Heer and Im, discovering newcomers Goldman, Jeong and Reygadas or Scorsese's extraordinary - and deeply personal - paean to cinema, I have no doubt you'll be surprised, moved, entertained and certainty challenged throughout the twenty days of MIFF.

My personal thanks to all of the Festival staff for their passion and commitment. I would also like to gratefully acknowledge the contribution of the Festival Chair & Board, MIFF members and supporters, including the industry, sponsors plus of course the filmmakers themselves.

Introduction taken from the 2002 official guide