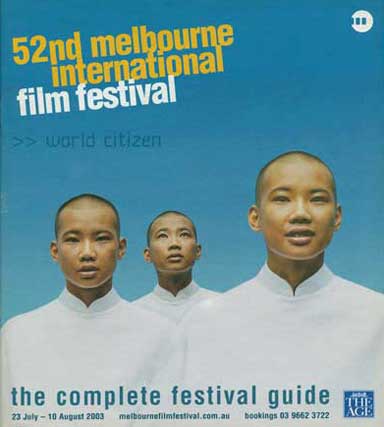 Welcome to the 52nd edition of the Melbourne International Film Festival. I promise that your senses will be stimulated as we traverse the myriad of cinema cultures and their filmmakers: from the delirious Canadian visionary Guy Maddin to new voices from Japan in Brain Monkey Sushi. The Festival is truly a 'World Citizen'.

It is timely that master Iranian director Abbas Kiarostami will travel from Tehran to Melbourne to present this year's centrepiece selection of his profoundly humanist work.

The MIFF 2003 programme peers beyond the glitter of the Bollywood behemoth, traces the arc of Asian martial arts films into recent Western mainstream acceptance and reveals the 'frissons' of challenging new French cinema.

Pivotal to this Festival is Australian film and the yields this year are as rich as they are diverse. Whether watching new work from Varda, Panahi and Haneke or revelations by newcomers Barmak, Li and Saville, we see that the people in these films are not much different from us.

My thanks to the dedicated Festival staff. I'd like to acknowledge the contribution of the MIFF Chair and Board, MIFF members and supporters, including the film community, sponsors and of course particularly filmmakers themselves.

Introduction taken from the 2003 official guide