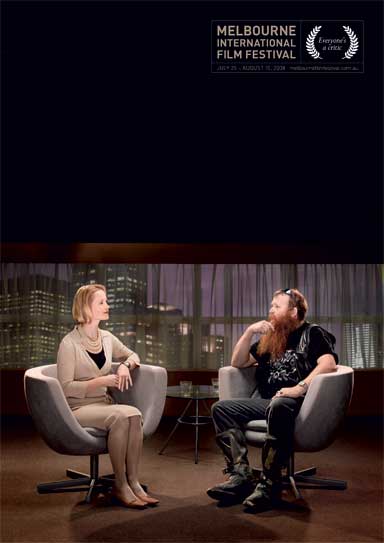 Program in Focus
Films from Africa and Romania featured in the 2008 program, as did a diverse selection of contemporary US cinema, showcasing a new generation of American filmmakers. Free Radicals looked at films that question, twist or simply deride accepted narrative and stylistic conventions, and a collection of horror films featured under the title of Full Moon Fever. Music documentaries, Asian cinema (Neighbourhood Watch), short films and documentaries continued to form a large base of the program. There was a focus on Ozploitation, Director's Fortnight's 40th anniversary and the animation gallery. The festival paid tribute to the late Taiwanese director, Edward Yang, and the youth and children's program of earlier festivals screened for the first time under the title Next Gen, featuring a collection of stellar films targeted at a young audience.

Filmmaker in Focus
George A. Romero. Romero was a guest of the festival, a retrospective of his work was screened.
{focus George Romero}

This year marks a historic moment in MIFF's illustrious history; for the first time MIFF's opening night film is one from our own production slate, the MIFF Premiere Fund – we bend down on grateful knees to the Victorian Government for their foresight in establishing the fund.

“Everyone's a critic” is our catch phrase this year; its an acknowledgement of the collective spirit that MIFF engenders in this great southern city. How will audiences remember MIFF 08 ? For the blood splatters left after George Romero's first visit to our shores, for MIFF's first ever survey of Romanian cinema, for the grace and beauty of Edward Yang, or the passionate discussions around this years slate of political documentaries? We have tried to create as many varied entry points for you to enter this year's festival – so embrace the films, take in a drink at the revamped Coopers Lounge and revel in this year's entertainment program.

So many people to thank – a wonderful staff insatiably passionate about this event, a pro active and supportive board, our cultural partners and sponsors – love you all. However you decide to approach the festival please consider becoming a MIFF member. There has never been a better time to do it. Take advantage of the priority quequing, enjoy the real discount in ticket prices and glow with satisfaction that you are joining an organization that will cherish your support.

Cinematically, the middle of the year is the silly season on the calendar.  While we battle the chilly winds of Melbourne , the big American studios roll-out their pop-corn tent-pole blockbuster summer products across the globe, more than ever, hitting and missing and pretty much gauging the value of each and every film on its world-wide box-office take.  Despite most people enjoying at least one of these as a sort of guilty pleasure, this business juggernaut ploughs on presumably working off public taste, and leaving some filmgoers wondering how low their brows  will be required to descend.

Enter MIFF.  Yet again, another superb fabulous wintry banquet of pan-continental film-making – yet again, an eclectic, sumptuous, daring and thrilling menu.  Richard Moore settling in beautifully as Host, and uncorking some of his secrets and favourites from the cellar, smiling conspiratorially as he gets you to taste.  And you remember once again just how great  a great meal can be.  Don't let anyone tell you anything different.  This is the right time of the year for some serious binge-viewing.

Introduction taken from the 2008 official guide