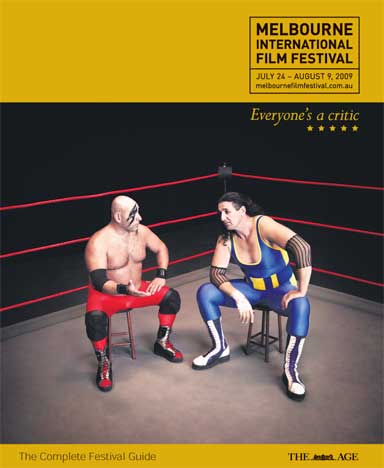 Program in Focus
The 2009 MIFF program continued to feature International Panorama, Documentaries, music documentaries and late night cult and horror films. New Balkan cinema featured, along with 5 feature MIFF Premiere Fund films co-financed by the Festival and the Victorian Government. Other program streams centred on retribution, human rights violations and films from the Japanese nuberu bagu of the 1960s. Arts and Minds celebrated the creative spirit, while other sections of the program focused on films dedicated to the adolescent gaze and the Australian post-punk underground. A slate of events took place, highlighted by a visit from Quentin Tarantino who introduced Inglourious Basterds, with the film's stars Diana Kruger and Christopher Waltz. British film composer Michael Nyman and Nicolas Winding Refn were also guests of the festival.

Filmmaker in Focus
Anna Karina. Karina was a guest of the Festival, a retrospective of her work was screened.
{focus Anna Karina}

This is the time of year to Think Big and Think MIFF; turn off your mobiles and laptops and focus on MIFF's big screens.

This year's Opening Night film, Robert Connolly's Balibo, is a complete change of tone from the opener of MIFF 08. It's a powerful political drama set to test the heartstrings and our relationship with Indonesia. Fast forward to our gala finale on August 8th, when we finish with an exuberant musical flourish in Rachel Perkins's Bran Nue Dae. Between these two extremes of contemporary Australian filmmaking lies another packed and varied program – including three more films from our own MIFF Premiere Fund.

As well as the warmth and comfort of your old favourite slots, this year the programming team has devised eight new programming streams – try Young Blood, Vengeance is Mine, Arts and Minds, or Eros + Massacre for a start. Be bold in your film selections, watch our website for updates and if you haven't yet joined up as a MIFF member please consider it. We're worth it.

Welcome again to one of the world's most revered and talked about film festivals. I was in Toronto last year promoting $9.99 (another smart animation feature expanding our reputation as highly original risk-takers); despite its commercial marketplace profile, the Canadian audiences are fabulous film buffs and they eye MIFF's expansive and eclectic global programming with a healthy degree of envy.

I've been away peddling some of our homegrown theatre on Broadway for the past five months and have returned to witness the blinding flash of an extraordinary explosion in local production, of thrilling and daring dimensions. Raw, funny, potent, beautiful filmmaking. I had an epiphany last December when I was standing on a beach in a heavy cassock in 45-degree heat shooting Bran Nue Dae. As an actor I couldn't believe I was performing in that rarest of genres – the indigenous Australian film musical. Broome rocks. You can jive in the aisles with that one on Closing Night. The punchy and powerful Balibo lights the fuse on Opening Night and in between you can reel from screen to screen, from country to country and feel the pulse of the planet. It's really pumping. Thanks, Richard and all of your team for this extraordinary annual fix.

Introduction taken from the 2009 official guide