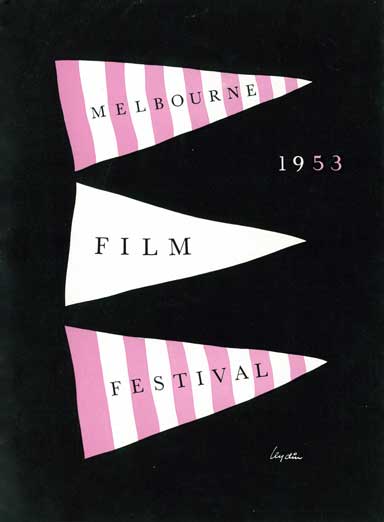 Program in Focus
Films curated for the second Melbourne Film Festival were categorised by topic or subject matter and included religious films, art and ballet and scientific films. Films were also programmed according to genre, with a focus on documentaries, animated and experimental films. Discussion sessions took place on Film Censorship, Future of Film in Australia and Film Criticism.

FROM OLINDA TO THE EXHIBITION

It was the Municipality of Cannes which in 1939 first thought of staging an annual movie gathering with prizes for the best films. The war forced the postponement of the event until 1947, but since then it has exceeded all expectations — a brilliant social event, highly diverting to the city and extremely profitable to its hotel-keepers.

Five years ago Edinburgh, almost as an afterthought, included in its great music and drama festival a documentary film section which has so grown in importance that it is the focal point of world interest in documentary and short experimental films. There are no prizes at Edinburgh — merely to be selected for screening is honour enough. Venice, on the other hand, has made its Grand Prix the most sought after award in the world of feature production.

From Convention to Festival

The Melbourne Festival springs from a national, not a municipal source. For some years film societies in every State of the Commonwealth have been devoted to the study and appreciation of the cultural aspects of cinema, and in Victoria and in New South Wales they have banded together in Federations. During January 1950, the New South Wales Federation held a week-end convention at the seaside resort of Newport and invited to it representatives of the other States. Here it was decided to form an Australian Council of Film Societies — a national body for importing films from similar organizations overseas and a body to represent the whole film society movement in Australia.

There was another convention at Newport in 1951, and for 1952 the Victorian Federation offered to organize the convention. Following the Newport tradition, the little mountain township of Olinda was selected, and a guest-house was booked. Soon, however, the Federation of Victorian Film Societies decided that the gathering could be expanded into a Festival. The response was so great that all available accommodation was booked and an outdoor theatre had to be set up in the local schoolground. Then the Organizing Committee suggested that the Olinda Festival might be the occasion for the presentation of the Commonwealth Jubilee Film awards, thus providing a climax to the Festival.

From Olinda to the Exhibition

Olinda's great success made it impossible to repeat the Festival on a similar basis. During the Australia Day week-end of 1952 the tiny wooden halls were so crammed with participants that only a large city auditorium seemed adequate to accommodate all who would want to take part next time. And so many folk who enjoyed themselves at Olinda insisted that there should be another Victorian Festival, that the organizers felt it their duty to allow the movement to grow and develop in accordance with the needs and wishes of its members.

After careful investigation of all the possibilities, the Committee came to the conclusion that the only practicable location in the early part of 1953 was the Melbourne Exhibition, even though there were technical difficulties to be overcome and the expense of providing projection facilities would be heavy. Though considerations of accommodation have forced us regretfully to leave a location we shall always remember with affection, traditions begun there are being continued.

Like Olinda, the Melbourne Festival will try to integrate films into programmes of significance, and each programme will be introduced by a competent authority. The discussions on controversial subjects begun at Olinda will continue in Melbourne, making the Festival a sounding board for public opinion as represented by a diverse panel of experts. And, like Olinda, we aim to make the Melbourne Festival a helpful, friendly institution. Not only will it enable people to enjoy and appreciate films which they other- wise could not see, but it will show educationalists and others how to go about making and using visual aids to the best advantage.

Melbourne Film Festival, like those in other countries, will be a "shop-window" for Australian productions, and act as a stimulus to film making in this country. Like other festivals also, it will tend to raise film standards everywhere. Apart from tangible advantages already suggested, a Film Festival like Olinda or Melbourne has many secondary, and even tertiary effects. Perhaps the most important is the friendships which have been formed among those who contribute as well as among those who partake.

The organizing committee has received so many heart-warming expressions of faith and offers of help, and it has had so much assistance from government departments, organizations, private companies, and individuals that it is encouraged to believe its efforts are really worth while. Moreover, without such support — moral, physical, technical, and financial — no festival would be possible.

As with the gathering at Olinda, the Melbourne Festival is breaking new ground and none can tell just where the future will lead. We feel safe in predicting, however, that there will be such a demand for more and bigger Festivals that there will be a regular annual event, having an inter- national competition associated with it. Already the Ford Motor Company has generously offered to provide trophies for future Melbourne Film Festivals, so that when we meet again there will be added the spice of rivalry, the spur of competition, and the pageantry of presentation to make the Melbourne Festival equal to the world's best. No more modest ambition can be entertained for a moment.

Introduction taken from the 1953 official guide