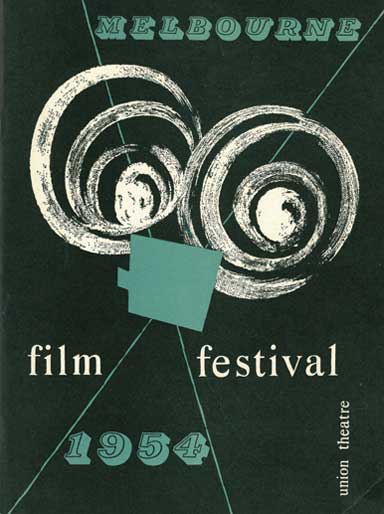 Short films were categorised according to topic, including Peoples and Places, and Science and Man, and also by country - Films From France, Australiana, The American Scene all featured. The majority of films programmed were European, mainly produced in Britain, France and Italy, however films from Australia and North America were also screened.

Six years ago members of the Melbourne University Film Society began a modest festival. For one week each year in the Union Theatre they showed their members the best feature films they could lay their hands on. Year by year the annual Festival grew in prestige and influence. Each year it was easier to persuade distributors to part with their cherished products.

Then in 1950 something happened which completely changed the Festival situation in Australia. The Federation of Victorian Film Societies were looking for a quiet spot to hold a convention of the Australian Council of Film Societies, and they selected Olinda. Quickly the idea developed into a Festival, and Olinda seemed the obvious place to distribute the Commonwealth Jubilee Film Awards. Members flocked in numbers that were an embarrassment, and accommodation which seemed optimistic at first, became wholly inadequate.

Last year, the Federation of Film Societies decided to hold its annual Festival in the Melbourne Exhibition Building, which, unfortunately, was never designed for showing motion pictures. Once again technical problems beset the organisers. Another change seemed imperative.

In 1954, the Federation has pooled its resources with the University Film Society's Festival, to create a new Festival which will combine the advantages of all previous ones.

It is the belief of the Festival Committee that a proper home has at last been found in the Union Theatre, and that the public will in future look to the Union Theatre for intelligent and entertaining cinema.

An awareness of film will be implanted in 1954 audiences' minds not only by the screening of first-class feature films, but by means of carefully selected speakers and discussion programmes. In this widening of the scope of the Festival, it has been found that the efficiency of organization has been increased by co-operation amongst the several film societies and federations which are jointly concerned in the festival.

This attitude of co-operation is a healthy sign: the single achievement of a group pooling its resources is much more impressive than the separate, un-integrated efforts of single organizations.

Introduction taken from the 1954 official guide