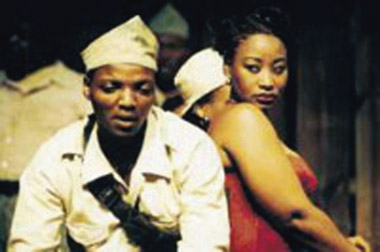 Mark Dornford-May's [U-Carmen Ekhayelitsha] was awarded the Golden Bear at Berlin this year. It is based on Georges Bizet's [Carmen] (1875), one of the most popular operas in musical history. Merimee wrote the novella that inspired Bizet - a story fuelled by love, jealously, revenge, erotic obsession and madness. Mark Dornford-May has set his interpretation of Carmen in a contemporary South African shantytown, translating the opera's lyrics into Xhosa.
"In this film, Carmen is no cliched construct of a gypsy femme fatale, but a sensuous, independent woman, whose love of freedom and courage endures even when faced with death. Carmen is a figure whose passion clashes with Don Jose's impulsive obsession. This new adaptation traces the couple's love story up to its tragic end that remains one of the most dramatic finales in theatrical history.
"Director Mark Dornford-May's adaptation is based on his own thorough analysis of the opera. Transposing a previous stage production into a feature-length film, his screenplay sets the story of the love affair between Carmen and Don Jose against the hardship suffered by those living in a South African township." - Berlin Film Festival
---
D Mark Dornford-May P Ross Garland S Ronelle Loots WS Fortissimo L Xhosa w/English subtitles TD 35mm/col/2005/120mins
Mark Dornford-May was born in the United Kingdom