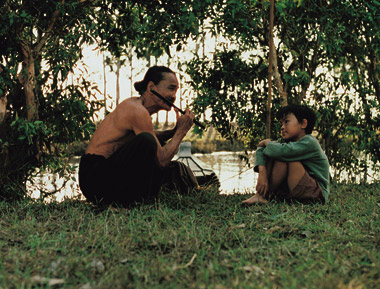 The striking debut feature of Minh Nguyen-vo, which won him the Youth Jury and Leopard awards at Lorcano last year, marks him as a filmmaker to look out for.
Set in Indochina in 1940, his [Buffalo Boy] is the coming-of-age story of 15-year-old Kim, who lives with his elderly parents in a waterlogged region where the sea meets the land. The annual rains have been overabundant and Kim must take their two buffaloes - their most prized possessions - to the mountains to avoid starvation. Little more than a child when he leaves, Kim's perilous journey with the drovers is a rite of passage, during which he is initiated into the male world of violence, alcohol and deception, but also friendship and freedom.
Returning home with just one buffalo, Kim argues with his parents and leaves his impoverished past to make a new life for himself. But he does not forget his family and while reconciling with his father shortly before his death, he learns the devastating secret of his own being.
---
D/S Minh Nguyen-vo P Oliviar Dubois WS Pyramide International Company Ltd L Vietnamese w/English subtitles TD 35mm/col/ 2003/102mins
Minh Nguyen-vo was born in Vietnam in 1959. [Buffalo Boy] (MIFF 05) is his first feature film.