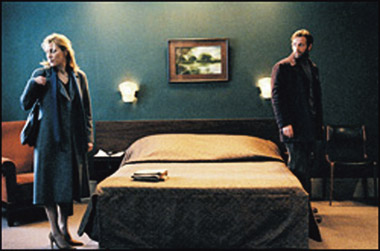 A festival favourite, François Ozon returns with a thoroughly affecting excavation of love. The forensic 5x2 won the Pasinetti Award, for Valeria Bruni-Tedeschi's remarkable performance as Marion, and was nominated for the Golden Lion at Venice Film Festival, 2004. "Five times two or the difficulty of being a couple: five moments in the life of a modern couple... This film is the portrait of a couple. Not a couple worn down by years of living together, but a couple of my generation (mid-thirties) who, after only five years together, have already been through all sorts of ups and downs. A man and a woman, Gilles and Marion, whose personalities and complexities will be illustrated, revealing the strength, determination and resilience of Marion and the weakness and fragility of Gilles. "To tell their story, I've chosen five important moments in their lives. Five scenes, each one containing a piece of the puzzle but no definitive answers, leaving room for the audience to freely interpret the film in accordance with their own personal experiences." - Francois Ozon --- D/S Francois Ozon P Marc Missonier, Olivier Delbosc S Emmanuele Bernheim WS Celluloid Dreams L French w/English subtitles TD 35mm/col/2004/90mins. Francois Ozon was born in Paris, France, in 1967. His films include Water Drops on Burning Rocks (MIFF 00), Under the Sand (MIFF 01), 8 Women (MIFF 02), Swimming Pool (MIFF 03).