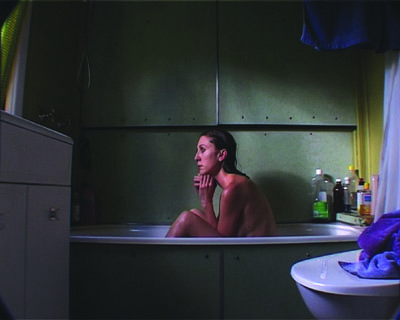 Love can be difficult at the best of times, and the remarkable Blacktown is a disarmingly honest tale of love-against-the-odds. Office secretary Nikki (Niki Owen) is disillusioned with her fraught, 'sometime' relationship with married boyfriend, Peter. Emotionally scarred by the dysfunctional relationship, she all but gives up on the possibility of finding anything more meaningful. But in the wake of a tortuous and disturbing blind date, Nikki meets Tony (Tony Ryan), a "black fella on a white bus". Despite their obvious differences and Nikki's disillusionment, the charismatic Tony shows Nikki that there is indeed room for love and romance in the desperate world of Blacktown. In this low-budget, verite-style film, Kriv Stenders has fashioned a very raw story in which emotional connection overcomes the constructed barriers of cultural and social difference. The performances of both Owen and Ryan are powerful for their honesty and immediacy, giving their characters emotional complexity and startling authenticity. Kriv Stenders will be attending the festival. --- D/P/S Kriv Stenders WS Kriv Stenders TD video/col/2005/92mins. Kriv Stenders was born in Brisbane, Australia, in 1964. His films include Horrible Man (1988, short), Two/Out (1997, short), The Illustrated Family Doctor (2005).