This year, award-winning writer and director Greta Nash will be premiering her latest short film Locker Room as part of MIFF's Accelerator 1 program. The film tells the story of 16-year-old Carla (Bridie Noonan), who is left conflicted after discovering an unsettling secret, kept from her by her three best male friends.

Locker Room embodies everything you could ask for in a short film. From gripping debut performances, stunning cinematography and a story that really stays with you, Nash has woven all the aspects of powerful storytelling together in a way that makes it seem effortless. Of course, filmmaking never really is effortless, and we spoke to Nash about how Locker Room came to be. 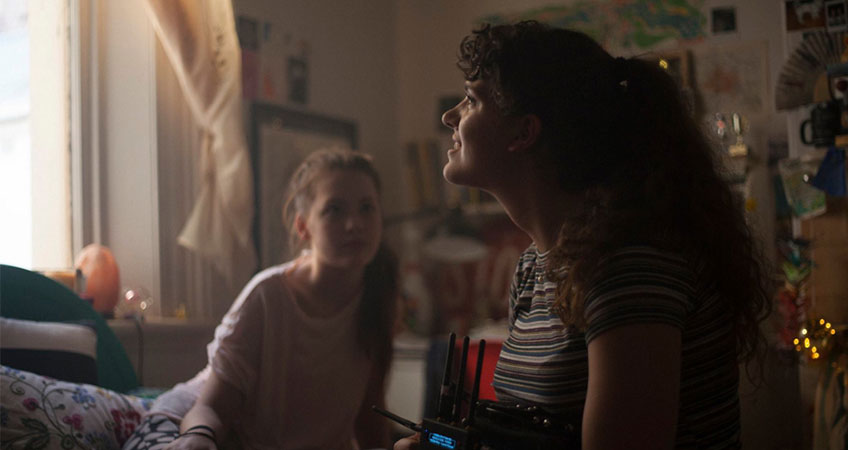 Still from Locker Room of director Greta Nash on set with Birdie Noonan.

Have you always felt the drive to write and create films?

I made lots of silly films growing up, like Lego stop-motion and lo-fi music videos of my brother in silly costumes dancing around the street, but I only really started seriously thinking about filmmaking later in high school. It just combined all the things I loved, like writing plays and short stories and doing drama, music and photography. It’s my favourite form of storytelling – I can’t really imagine doing anything else now.

Who are the primary influences on your work?

How did you decide that Locker Room was the movie that you wanted to make?

I went straight from school to VCA, which left me feeling pretty burnt out, I think. I forced myself into writing a bunch of lacklustre first drafts before I just let myself have some time off to travel (and think about literally anything else other than movies.) It had been nearly a year since my graduate film and I was beginning to worry that I’d never feel motivated enough to make another, which turned out to be silly, because I came up with the idea after being home for, like, a week. I remember being at the dog park with my mum and telling her the gist of it, and feeling so excited and so terrified because I’d never really attempted anything like it before.

I was pretty much directly inspired by this relentless series of scandals that occurred in the middle of last year ... I wanted to show the bravery of girls who stick up for each other, and how events like these affect people in ways less straightforward than you’d expect.

The story seems particularly pertinent in light of recent scandals in private high schools and university colleges across Australia. Was this intentional?

Yeah – in fact I was pretty much directly inspired by this relentless series of scandals that occurred in the middle of last year. They were so appalling to me and my friends from high school, and yet not at all surprising given some of our own experiences. We were sharing these articles with each other in our private Facebook group, and I just couldn’t get my head around it, so I guess making a short film was my way of processing things and contributing to the discussion.

What kind of perspective were you hoping to offer on the issue?

I didn’t really want to make a film directly about the “victim” because I felt like I'd seen that before, but I didn’t want to dedicate all my time to writing a story about “the perpetrator/s” either, because I felt like these boys didn’t need any more attention. Initially I was keen to explore a character caught in the grey area, a girl who feels her allegiances are split and has to re-evaluate how she sees herself, and though I re-drafted pretty relentlessly, that was the premise I ended up returning to. I didn’t want to preach or try and solve the problem because I don’t think I am capable of that – I just focused on telling one specific story, and tried to make the characters as real and nuanced as possible. I wanted to show the bravery of girls who stick up for each other, and how events like these affect people in ways less straightforward than you’d expect.

When I first started making films my default protagonist was often some variation of a dorky white guy ... When I realised what I'd been doing I became very conscious, almost feeling a sense of responsibility to atone for my sins or something by writing only female protagonists.

Many of your short films to date, while vastly different, feature nuanced and relatable female protagonists. What is your process like for developing these characters?

That’s interesting, because when I first started making films at VCA my default protagonist was often some variation of a dorky white guy. I wasn’t even aware of it; I was just young, and replicating what I’d been so accustomed to relating to on screen. When I realised what I'd been doing I became very conscious, almost feeling a sense of responsibility to atone for my sins or something by writing only female protagonists. I’ve stopped freaking out about it so much now, and I don’t think it’s so forced… most of my ideas begin with a character, so it really just depends on who pops into my head.

With Locker Room, it was important for me to approach all the characters with the same level of care, because I wanted all of them to feel really human and multi-faceted. On the fun side of things, I like making playlists for different characters – music helps a lot.

The performance by Bridie Noonan as Carla is so captivating and moving. What was the casting process like that brought her on board?

I’m so glad you asked this question! I’ve actually known Bridie since we were kids. Our families used to go to this random beach town called Indented Head during the summer and we’d put on these silly plays, probably about 10 years ago! Then late last year I saw her at a dinner party and mentioned that I was writing something she might be suitable for, and I auditioned her in my living room and discovered that she was just so natural on screen. Her gaze is incredible! She was the youngest person on set, at 15, and had never done a short film before… I’m in awe of her.

What kind of stories do you want to be telling in the coming years?

All my favourite films make me feel less lonely so I want to be able to do that for others. Or maybe just for myself. That probably means more films about girls and young people, stuff that I can personally relate to. But I’m generally not too interested in writing films where “love is the answer” or heavy genre stuff.

What are you working on next?

I’ve been lucky enough to start getting some work directing music videos, which is really fun. I’m also developing some feature film ideas and trying to write as much as possible.

Locker Room screens as part of the Accelerator 1 program of short films by emerging filmmakers from Australia and New Zealand, at 4pm on Saturday 12 August and 9pm on Tuesday 15 August. As an Accelerator filmmaker, Greta Nash is a guest of the festival.