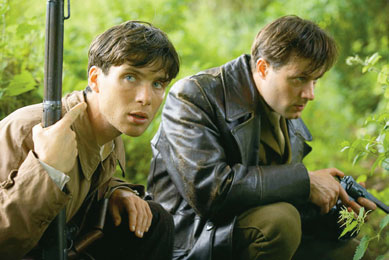 The Wind that Shakes the Barley was winner of the Palme d'Or at this year's Cannes Film Festival.

Both an ardent observer of reality and a deeply committed political filmmaker, Ken Loach turns back the pages of time to confront issues of family, patriotism and liberty in his latest offering about the Irish ‘troubles'. Ireland 1919: Workers from field and country unite to form volunteer guerrilla armies to face the ruthless Black and Tan squads that are being shipped from Britain to block Ireland's bid for independence. Driven by a deep sense of duty and a love for his country, Damien (Cillian Murphy) abandons his burgeoning career as a doctor and joins his brother, Teddy (Pádraic Delaney), in a dangerous and violent fight for freedom. As the freedom fighters' bold tactics bring the British to breaking point, both sides finally agree to a treaty to end the bloodshed. But despite the apparent victory, civil war erupts and families who fought side by side find themselves pitted against one another… even brother against brother.