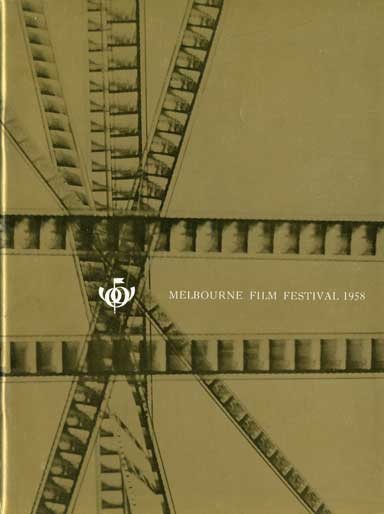 Program in Focus
1958 was the first year of the Australian Film Awards, an annual event sponsored by the Melbourne Film Festival and Kodak to direct public attention to Australian films and to encourage high standards in their production. Categories included Documentary, Educational, Advertising and Open.

An exhibition, Horizons of the Cinema, was displayed at the National Gallery and celebrated the artists and technicians who had made cinema possible. The exhibition was on loan from the Venice Film Festival and was first mounted in 1953 to commemorate the 60th anniversary of the invention of the motion picture.

The Melbourne Film Festival is organized by the Federation of Victorian Films Societies, it has the support of the State Film Centre and the co-operation of the University of Melbourne

The Melbourne Film Festival was born six years ago when the first Australian International Film Survey was started as an experiment at Olinda in 1952. At that time the number of films shown and the countries participating was small, but with the passing of the years the Festival has grown both in stature and size, and in 1958, with the recognition of the International Federation of Film Producers' Associations, the Melbourne Film Festival has reached maturity.

The Seventh Melbourne Film Festival will present 130 films from 21 countries. These films were selected for their achievements in the field of cinematography, or because they present a new point of view, use a new approach or explore a new technique towards rendering this youngest art more vital in its message and the most expressive of our age,

Enjoying the support and co-operation of many national organisations — both at home and abroad — the Melbourne Film Festival has become the highlight of the Australian film-going year.

Introduction taken from the 1958 official guide