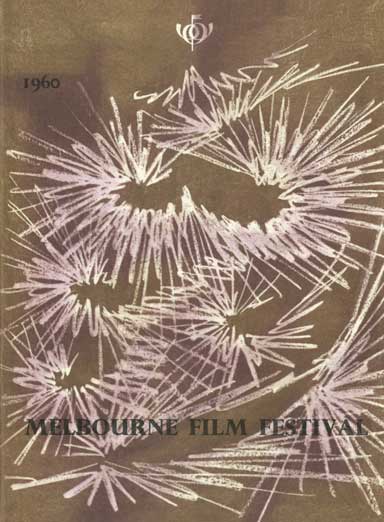 The year 1959 was a vintage year for films. Throughout the world it seemed there was  a gradual awakening — perhaps a throwing off of the inertia caused by the inroads that  television had made on the cinema screens, and on the minds of the men that make  films. But this awakening came, not so much from the major studios, not from the  Front Office, but from independent producers, from younger talents who everywhere  fought against the problems of finance and distribution, from the adventurous who  were able to communicate a passionate concern about the media they are using.

In presenting its array of films gathered from many countries, the Melbourne Festival  has attempted to show some of the work of this newer generation, these independent  producers. From Britain there is We are the Lambeth Boys to crown Free Cinema's  achievements, and Richard Williams' cartoon of ideas. The Little Island. From France,  Hiroshima Man Amour, the year's most dazzling experiment. From the United States,  the independently produced, controversial. Savage Eye; the radical Have I Told You  Lately; the uncompromising Cry of Jazz. From India, Ray's splendid third part of  his Bengali trilogy.  Cartoons with fresh ideas from Yugoslavia, experiments from  Poland, and so on.

It is exciting that Britain and America, Japan, France, Poland and Czechoslovakia are  making films which seek to express aspirations of the intellect. It is just as exhilarating  to find good films from countries with relatively newly established film industries — a  major achievement from Bulgaria; a promising Ceylonese film from a new director; an  epic from Finland.

In casting our nets wide we have also attempted to show the latest from the established  directors—a brilliant Kurosawa, a rejuvenated Rossellini — the veterans are still in  vigorous form, but, unfortunately, no Bergman, no Bunuel, no Wajda. In trying to pick  the best from the overseas Festivals we have fought to avoid, perhaps not always  successfully, the dangerous diplomacies, the balancing of interest.

Primarily, the function of the Melbourne Film Festival is to show to the film lovers of  Melbourne the better work of the film-makers, to help foster the growth of the cinema  as an art form. But like most Festivals we have also a commercial part to play. We  are, or would like to be, a shop-window for distributors of films — both those that buy  and those that sell — for we hope that, sooner or later, many of the films shown at the  Festival will reach the screens of the commercial cinema, since only in the screening  of good films to large audiences — far larger than the audiences of Festivals — can good  production in this expensive art form be continued. So, although members can preview  Hiroshima Mon Amour, we rejoice that it will also be shown in a city theatre, and  shown very soon — Australian distributors do not keep us waiting so long, now. It is  good to see Marcel Camus' exotic Orfeu Negro only a few months after Paris, and it is  reassuring to read about the nouvelle vague and know that soon Les Cousins and Les  Amants will soon be shown to us.

Introduction taken from the 1960 official guide