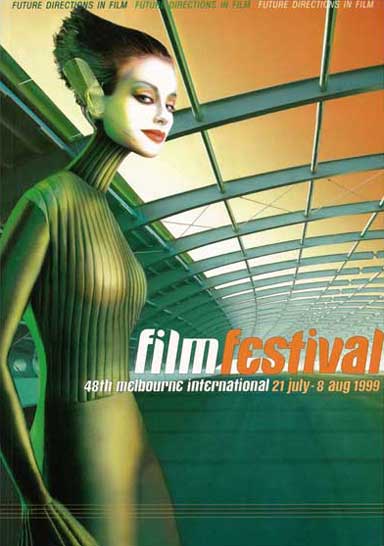 Program in Focus
MIFF's 1999 program was organised into 14 main sections. Program streams include International Panorama, Regional Features, Australian Showcase, Cinema of the Next Millennium, Journey to Iran, Mavericks: Bad Boys of Cinema, George Cukor, Cutting Edge Cartoons, Mozart, Experimental Cinema, Architecture & The City, Documentaries, as well as music docos and a section of films curated around the idea and influence of the millennium bug. The International Short Film Competition, a satellite interview with David Cronenberg, as well as lectures, forums, panels and Q&A sessions took place over the course of the festival.

I am delighted to be presenting our 48th film festival to Melbourne audiences and on the cusp of the year 2000 it seems appropriate to look ahead. This year's theme,  'Future Directions in Film', sees the end of an era as very much a new beginning' Although the 20th century has often been referred to as the century of cinema, I do think that this industry has good reason to greet the third millennium with confidence. Cinema is the most frequented cultural activity in Australia and the industry has enjoyed considerable growth for more than a decade. Film continues to capture our imagination and declare its inventive spirit.

Multimedia is also presenting challenges to traditional narrative structure by allowing the viewer to interact and determine for themselves the directions they will take a work. David Cronenberg's eXistenz takes up this theme by introducing a daring new organic game system which is downloaded into humans, shattering the line that separates fantasy from reality. Cronenberg's future is one where technology will be so advanced that it borders on biology, encapsulating not just the physical body but the mind as well.

The question of what our future holds emerges as a central preoccupying theJ in this year's festival. This programme examines our visions, expectations and trepidations as we move into the third millennium.

The 2000 Seen By... series is a highly praised collection of films made by celebrated and emerging directors sharing their view of the world in the next century. The multimedia component of the festival, The Bug, looks at our paranoia about technology and asks whether the millennium bug really presents any political danger or whether it is just an unfortunate accident of software which forces us to feel human.

The festival presents a unique opportunity to explore themes preoccupying contemporary world cinema. I hope you find the visions inspiring and stimulating. It's been a real pleasure selecting them. I hope you enjoy the festival

Introduction taken from the 1999 official guide