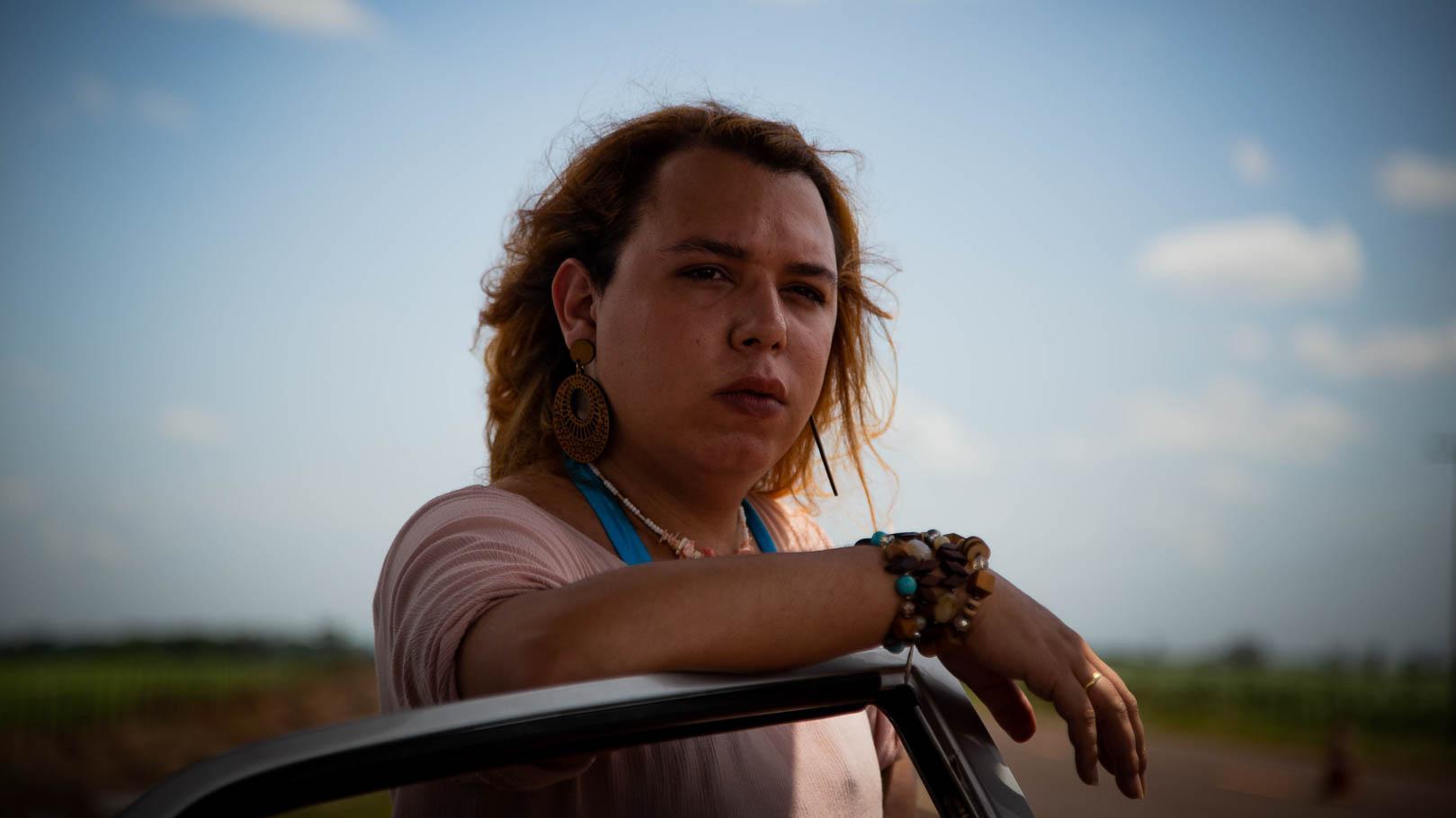 Verdant and uniformly neat, the undulating soy fields extend beyond the horizon. A group of rheas peck at seeds and blink at hidden dangers. High-tech harvesting equipment whirrs, kids run in and out of half-finished identical housing estates, and a body lies among the crops.

Premiering at the 2021 International Film Festival Rotterdam, Madiano Marcheti’s debut feature film Madalena takes what might otherwise be rendered as a gory, hard-boiled thriller – the murder of a trans woman set against the backdrop of exploitative agricultural practices and corrupt politics in Mato Grosso, Brazil – and turns it into a meditation on violence against transgender people. Reuters reports that the number of trans people killed in Brazil rose by 70 per cent in 2020 compared to the previous year, and, as the film’s title card reminds us, the country has the highest trans murder rate in the world.

Madalena eschews coherent narrative for a more elliptical form of storytelling. In Sebastián Lelio’s A Fantastic Woman (MIFF 2017), another Latin American film about a trans woman, the protagonist, Marina (Daniela Vega), is at one point described as a “chimera”. Madalena goes one step further, creating a central character whose story is so impacted by the social and political erasure of trans lives that it becomes background noise.

Marcheti does not present Madalena through the eyes of the protagonist, but rather through the tangential lives of three characters who orbit one another through sprawling plantations and neon clubs. First is Luziane (Natália Mazarim), who is working as a bouncer to save enough money to pay off her scooter. After a few trips to her deserted apartment to retrieve owed money, Luziane enters through the unlocked front door and takes a wad of cash. In the darkness, lights start to flash, and something vaguely supernatural – though we are never sure exactly what – occurs outside the frame. The music stops, the door creaks open and, before anything is revealed, the scene abruptly ends.

Next is Cristiano (Rafael de Bona), reluctant heir to the sprawling soy farm, who happens upon Madalena’s body, then walks away, anxious about potentially damaging his mother’s bid for political office. With his high-tech farming equipment and sports car Cristiano is emblematic of Brazil’s corrupt upper class; he shoots up steroids and argues with his father about harvesting methods, growing increasingly manic as he attempts to hide the body. Marcheti conjures traditional horror techniques through the sound of droning harvesters that loom like malevolent glowing orbs, their otherworldly light illuminating Cristiano’s terrified face. We don’t see what scares him, and Marcheti keeps any supernatural elements unseen. This decision, though stylistically interesting, makes Madalena feel disjointed. Mirroring the erasure of trans experiences, the film denies the audience accessibility.

Marcheti then focuses on Bianca (Pamella Yulle), a trans woman and carer who, alongside her friends, clears out Madalena’s looted apartment before taking an idyllic drive to a small oasis of jungle amid the endless soy plants. Here, she releases one of Madalena’s necklaces to the current as her friends swim and sunbathe on the banks. Yet, even in such moments of queer kinship and joy, Madalena is complicated by the lack of focus on Madalena herself. Her life and her death are swallowed up by the other characters’ storylines, so much so that it’s easy to forget about her entirely.

Marcheti avoids shock value at every turn, instead presenting the murder as something shared through WhatsApp group texts and then promptly ignored. Even the act of clearing out Madalena’s empty flat is completed with a sense of routine, as though Bianca and her friends have done this before. It is easy to forget the tragedy, lulled by the saturated colours and dreamlike cinematography of Tiago Rios and Guilherme Tostes. The experience of watching Madalena feels, at times, like a lucid dream, notably in moments when the camera lingers on scenes of strangeness. Shooting a music video in the soy fields, a group of women in hotpants body-roll to reggaeton while drones fly overhead. In the club, Cristiano dances to himself in the mirror as the beat drops and lights pulse. Rios and Tostes always maintain distance between the camera and their subjects, and within that space is a wealth of unspoken trauma. Like Madalena herself, these three characters’ motivations remain mysterious and inaccessible.

Such moments of strangeness are treated as banalities, too. Multiple characters make offhand references to the prevalence of UFO sightings around Mato Grosso, though this is brushed off with the same apathy afforded to the murder rate and economic hardship. Dreamlike as it is, life among the infinite soy fields of the deforested Mato Grosso region is not portrayed as anything but demoralising, exploitative and tragic. When she casually mentions her plans to move away with a lover, Bianca is shot down by her friends, who call her crazy and insist that she’ll just end up unemployed and abandoned somewhere else. Each character is trapped in monotony, and Madalena’s death fits neatly into their usual routines alongside all the other trivial matters of the day. The supernatural outbursts are vivid reminders of how violence and trauma can permeate the everyday without acknowledgement.

The horror of Madalena is the casual apathy with which the title character’s death is treated. At times, the disparate narratives are too separate; their connections to each other and to Madalena herself are so tangential as to be almost indiscernible. Bianca’s chapter feels like it could be a standalone film. It is in the scenes exploring the residual trauma experienced by Madalena’s trans friends that the film is most compelling, but these genuine moments end up lost in the broad scope of the film, alienating the viewer and diverting attention away from the tragedy at its core. The weight of the film’s important themes – political corruption, poverty, exploitative agribusiness – fails to land without the central focus on Madalena herself. Stylistically inventive and visually stunning, Madalena’s experimental approach to trauma is intriguing but overly oblique, making the viewer complicit in the act of forgetting.

Madalena screened as part of the MIFF 69 program in 2021.