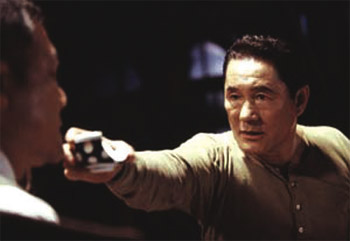 Blood and Bones centres on Kim Sun-pei, a Korean migrant attempting to build a fortune in Japan. Contrary to his hopes, the Japan he encounters is a brutal world of discrimination and hard labour. Responding with all the violence, selfishness and severity imaginable, he becomes hated and abandoned by everyone, and is the scourge of his community. If Coppola's The Godfather depicted the hopes and shadows of the American Dream, this film is a portrait of a shattered Japanese Dream, rent apart by the destructive power of greed and ego. Blood and Bones marks the first time Kitano Takeshi has appeared in a leading role under another director's watch in more than 10 years, and as the film's anti-hero he delivers one of the most searing performances in recent memory. "Even as we're repulsed by Kim's (Takeshi Kitano) violence and heartlessness, we're seduced by his survivor's charisma - in fact, Kitano's performance is so compelling that Kim's victims have a hard time competing for our compassion." - Time Magazine. Contains scenes that may offend some viewers. Hideki Ujie will be attending the festival. --- D Yoichi Sai P Nozomu Enoki S Yoichi Sai, Wi-Shing Chong WS Celluloid Dreams L Japanese w/English subtitles TD 35mm/ col/2004/144mins. Yoichi Sai was born in Nagano, Japan, in 1949. His films include Where Is The Moon (1993), Dog Race (1998), Doing Time (2002), Quill (2004).