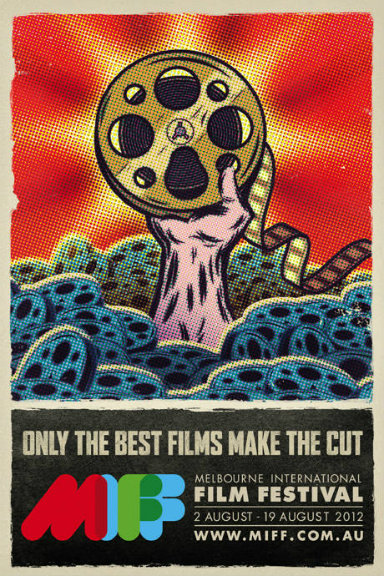 Program in Focus
In 2012 the MIFF program offered its usual selection of unforgettable global and local cinema. The TeleScope! Visions from the EU stream returned, with an outstanding selection of celebrated European films, all in the running for the TeleScope Award (won by Ben Rivers' Two Years at Sea). Speaking of awards, The Age Critics' Award for best Australian feature film went to Amiel Courtin-Wilson's Hail, while The Intouchables and Searching for Sugar Man took out the festival's audience awards for feature film and documentary respectively. A separate documentary stream, Street Level Visions: Indie Docs from China, cut through the clichés of nightly news bulletins to show us China through the eyes of some of the nation’s bravest filmmakers. We took an in-depth look at films from Sweden and Latin America in Facing North: Swedish Cinema in Focus and Through the Labyrinth: New Latin American Cinema. The Backbeat program featured a special tribute to late Beastie Boy Adam ‘MCA’ Yauch, while Masters & Restorations was designed to get audiences discussing, debating, reminiscing and rekindling their love of cinema.

Welcome to MIFF 2012! As the festival moves from its milestone 60th edition into its 61st, it faces numerous challenges. We have noticed, this festival more than any other, the predominance of the digital format over traditional 35mm celluloid film. With the digital world there are inevitably more films to consider, creating tougher selection decisions, not to mention the countless new modes of exhibition. Despite all this, we still ensure only the best films make the cut. We also ensure you will see these films in the way they were intended to be seen: with an eager audience in wonderful cinema auditoriums. Every new challenge strengthens our dedication to presenting exciting movies from all around the world.

There is so much to explore in the program in 2012. We take a look at the freshest cinema from Sweden, including a very cool Scandi-crime retrospective (a genre enjoying a spectacular comeback). We also feature a curated program of independent documentaries from China and a new section of films about filmmaking, for the ardent cinephiles. We go back to the early days of cinema, when it was perhaps at its most beautiful, with a Jean Epstein retrospective. We screen all five features of the ‘bad boy of French cinema’, Leos Carax. And we have put together a program of neurotic American comedy from the 70s era.

Thank you to everyone – our amazing staff and board, filmmakers, distributors, venues, supporters, sponsors, volunteers and friends – who came together to make this mammoth program happen.

On behalf of the MIFF Board and festival staff, I would like to wish you all an excellent MIFF 2012.

It only hit me recently that I have been patron of this prestigious and internationally lauded festival for over a decade.

Thousands of films have been screened in that time. Possibly every serious and fascinating film culture from around the planet has been curated and showcased. And think of the changes that have snuck up on us since the last century – sometimes rapid, sometimes sly.

The six big Hollywood studios rely more and more on massive tent-pole franchises, slacker comedies, comics and fantasy all year round, which has given the global independent sector creative freedom and daring. Commercial stereoscoped 2D has morphed into artful 3D via Wenders, Herzog and Scorsese. Challenging documentaries play to bigger and keener crowds.

On a set you hardly ever hear the mechanical cry of the past – “check the gate” – after a successful take, and directors peruse their dailies almost immediately on their iPads; no-one waits for prints back from the lab in this digital present.

Mostly we can’t even call them moving pictures – they’re dancing pixels – but it’s the heartbeat of storytelling that still grabs us. So even though we tweet, blog, link-in, flickr, tumble and facebook each other, we still passionately seek the communality of the film-going experience.
But the biggest change in the past decade or so is that anyone who was 10 in 2000 (let’s call them the Pixar/Twilight/Potter Generation) is now a young adult. We warmly invite them to discover this festival, which has its finger on the pulse of essential local and world cinema. And if you’re 10 now, please join us for the always-popular Next Gen program.

Can’t keep up? Feel like you’re missing out? Get really MIFFed and book big!

Introduction taken from the 2012 official guide